Amazon have revealed the release date for their upcoming Lord of the Rings prequel TV series. The show will launch on 2 September 2022, exclusively on Amazon Prime Television. 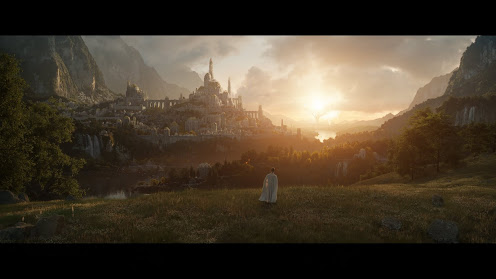 The date will be disappointing to those who had anticipated an earlier release; some credible rumours had been suggesting that Amazon was eyeing a release window between February and May of next year. However, this became a bit more unlikely as reports massed that Amazon are spending absurd amounts of money on the show and its vfx budget. Such a hefty amount of effects requires a lot of post-production time. With live-action shooting on the show wrapping today, this means that that show will spend over thirteen months in post-production before airing (not to mention the early vfx work done whilst the show was filming), a truly startling amount of time for a TV show.

Amazon did release the first-ever publicity image from the project, showing a figure in white standing in front of typically spectacular New Zealand Middle-earth scenery, with a great city in the background and, on the horizon, what appears to the infamous Trees of Light, the Gold Tree Laurelin and the Silver Tree Telperion. This image is fascinating because it is apparently from before even the First Age of Middle-earth's history, when the godlike Valar raised the Trees of Light in the great western continent of Aman to bring light to the world of Arda before the rise of the Sun and Moon. The city in the foreground might well be Valmar, the great city of the Valar in the land of Valinor (or possibly Tirion, the great Noldor city in the Calacirya, the Pass of Light). However, all previous material for the show indicated it would be set in the Second Age. Whether this was some kind of grand misdirection or just a hint the show will feature extensive flashbacks to earlier epochs is unclear.

One thing Amazon did not confirm was a title for the show. The assumption is that the series will have a subtitle so people can differentiate it from the Peter Jackson movie trilogy, with Lord of the Rings: The Second Age or even Rise of the Lord of the Rings (urgh) mooted, as the show is expected (or at least was, until this image was revealed) to at least partially tell the story of how Sauron forged the One Ring. That title remains unknown for now.

Hopefully Amazon will release some more information over the next thirteen months. Meanwhile, the team are gearing up to start shooting Season 2 of the series, which is expected to begin in January.