Agnes Nitt, formerly of the secondary Lancre witches' coven, has relocated to Ankh-Morpork to become a singer in the Opera House, assuming her phenomenal natural talent would be enough, and so it proves...enough to become the real voice behind a much more photogenic but less-talented, would-be starlet. But a spate of murders has the opera company on edge. Meanwhile, Nanny Ogg has had her cookbook published, but Granny Weatherwax's keen eye suggests she has not been getting the promised royalties. They head to Ankh-Morpork to find the missing money and, just coincidentally, look for a third witch to replace Queen Magrat. 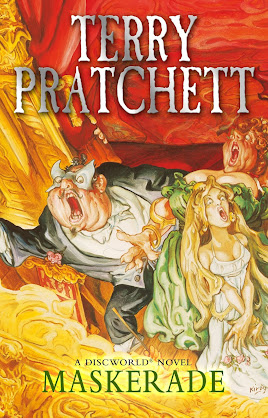 When I embarked on this Discworld re-readathon, Maskerade was possibly the book I was most intrigued to reach. Not because it's the best Discworld book (which it isn't), but it's possibly the most low-key, least-discussed book in the entire series. It's actually quite impressive how constrained it is a novel: almost the entire book (bar a couple of early vignettes as Granny and Nanny travel to Ankh-Morpork via stagecoach) takes place in just one building, with a very focused cast of characters. In fact, given that Discworld stage plays were already a regular thing when Pratchett wrote the book, I wonder if he'd deliberately kept the book restrained and focused to better accommodate stage versions of the narrative.
The narrow scope helps Maskerade improve on its immediate predecessor, Interesting Times, which might be the least-cohesive Discworld novel of them all. Here, the tight focus and clearer stakes makes for a more enjoyable read, though an imperfect one.
Ostensibly this is a book in the "Witches" sub-series, picking up after the events of Lords and Ladies, in which Magrat departed the coven to become Queen of Lancre after they saved the kingdom from an invasion of transdimensional elves (as you do). It is, refreshingly, much more focused on Nanny Ogg than it is on Granny Weatherwax, and seeing Nanny use her natural charisma and charm to infiltrate the Opera House and ingratiate herself with everyone is quite entertaining. Granny Weatherwax is surprisingly low-key, with several notably powerful moments but spending a lot of the book in the background as Nanny and Agnes Nitt take on the lion's share of the action. This may actually be the start of a trend where Pratchett has to bench some of his most hyper-capable characters for parts of the story because if they were properly involved from the off, they'd have the problem licked in five minutes.
It's a funny book, riffing hard on The Phantom of the Opera but easily-missed lines lampoon everything from Shakespeare to Cats to "a play about a miserable guy called Les." It is, once again, "Pratchett does xxx but in Discworld," where xxx is the opera, having previously been rock music (Soul Music), religion (Small Gods), shopping malls (Reaper Man) and the cinema (Moving Pictures). This format has resulted in some of the best Discworld books but can also get formulaic, with Pratchett settling for making funny references rather than using the satire to inform more powerful points. Maskerade probably tilts more towards the more formulaic end of the spectrum, but formulaic Pratchett is so much better than a lot of authors on their very best days, that that's not much of a criticism.
The book rattles along until a very amusing, meta-fictional big curtain call, taking in (and riffing on) every famous musical and operatic tradition you can think of. There is a bit of a missed opportunity here, though, as the City Watch gets involved in the story but only through a new character and cameos for Nobby and Detritus; Sam Vimes does not show up in person, which could have been entertaining in a Javert kind of way. Of course, that could have led to an Avengers-style team-up between Vimes and Granny Weatherwax, arguably Pratchett's two most popular and competent protagonists, but alas that is not to be. A subplot about Greebo occasionally reverting to the humanoid form he last inhabited in Witches Abroad also feels somewhat underdeveloped.
Maskerade (****) is the Discworld series at its most relaxed, reliable and laidback. It's not challenging Night Watch or Small Gods' claim on being the best book in the series, but it is a fun read and a good time. The novel is available now in the UK and USA.
Posted by Adam Whitehead at 19:13

For its laid back style, taking place almost entirely in one location, Maskerade is one of my favourite Discworld novels. It holds a quote that comes to mind every now and then:

Granny: Why is there a need for a secret police?
Policeman: Because there are secret criminals.

If memory serves, the book also does quite a bit of fat-shaming with regards to Agnes Nitt. Pratchett does have a certain flair of casual cruelty towards nonconformists for his jokes, that usually gets swept under the rug when Pterry gets raised up as a social justice paragon.

Speaking of Agnes Nitt - it's hard to miss the similarity in name to Agnes Nutter from Good Omens, 5 years earlier.