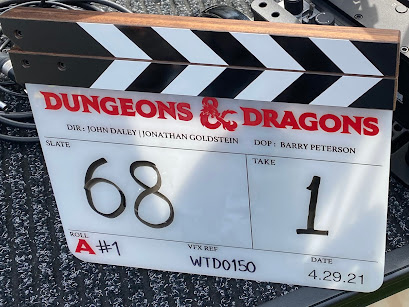 Shooting began on or around 29 April, with shooting based at the Titanic Studios in Belfast, Northern Ireland (previously home to Game of Thrones). Location shooting has taken place in Northern Ireland, Iceland and at Alnwick Castle, Northumberland.

Daley co-directed the film with his long-term collaborator Jonathan Goldstein. Their previous projects include the comedy films Horrible Bosses and Game Night, and writing the MCU movie Spider-Man: Homecoming.

This is, technically, the fifth Dungeons & Dragons feature, following on from three increasingly low-budget movies in the 2000s (only one of which was theatrically released) and an animated Dragonlance movie. However, this project has a vastly greater budget.

The film is set in the Forgotten Realms world and the city of Neverwinter will feature. Beyond that, little is known of the plot. The cast includes Chris Pine, Michelle Rodriguez, Justice Smith and Regé-Jean Page, who are believed to be members of an adventuring band who run afoul of a villainous plot orchestrated by Forge Fletcher, played by Hugh Grant.

The film is currently set for release by Paramount Pictures on 3 March 2023. A D&D TV series is also in development with John Wick writer Derek Kolstad developing a concept. Wizards of the Coast have teased this project may involve Forgotten Realms signature character Drizzt Do'Urden in some capacity.