Doctor Who star Jodie Whittaker and showrunner Chris Chibnall have announced their plans to depart the series at the end of 2022. 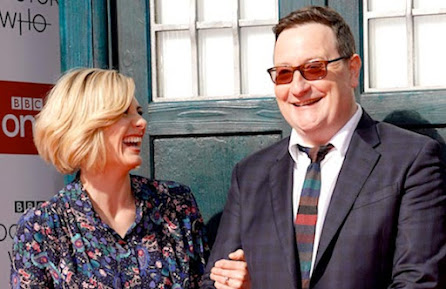 Both Whittaker and Chibnall joined the show in 2018, with Whittaker playing the Thirteenth Doctor (succeeding Peter Capaldi in the role) and Chibnall taking over the creative direction of the show from Steven Moffat, who had helmed the show since 2011. Whittaker is the first woman to play the role of the Doctor since the character's inception in 1963, whilst Chibnall is the third showrunner to helm the series since its return in 2005.

Whittaker's departure after the forthcoming thirteenth season (of the reboot) was widely anticipated; no actor has played the role of the Doctor for more than three seasons since Tom Baker departed the role after seven seasons in 1981. However, Chibnall's departure is more surprising; barring the one-off 1996 TV movie, no other showrunner has done less than five years in the role since Graham Williams (1977-80) and Philip Hinchcliffe (1975-77). Traditionally, most showrunners have since 1980 have stayed on for the run of at least two Doctors whilst Chibnall will have done just one.

Their tenure on the show has been something of a mixed bag. Whittaker's energetic performance has mostly been praised and her first full season in the role was something of a relief, with more of a focus on historical stories and comprehensible storylines with clear stakes and more logical resolutions than the preceding seasons, which often relied on hand-waved solutions and variably comprehensible plotting. The season was also notable for not having any kind of over-arcing storyline, for the first time since 2005. However, her first season failed to produce an outstanding, classic episode of note and there was criticism of the decision to give her three companions, making for an overcrowded TARDIS and there not being enough story to service four regular characters plus the guest star of any given week.

These problems persisted into her second season in the role, but were also accompanied by some backsliding into the fast-paced but nonsensical plotting that characterised the worst of both the Davies and Moffat eras. Chibnall also put into motion a planned story arc that would retcon the Doctor's backstory and origins, a decision that would draw a very mixed response from hardcore fans and seemingly baffled more casual viewers, for whom one of the main draws of Doctor Who is much less of a reliance on long-running storylines and impenetrable background lore compared to other SFF franchises. Viewers would seem to agree, with ratings (particularly first-night ratings, although these have been in global decline as people switch en masse to streaming and timeshifting) slumping by almost 50% over the course of the two seasons (although, once the the initial bump caused by Whittaker's arrival is factored in, ratings remained somewhat comparable to Capaldi's run).

Although Chibnall's writing and plotting attracted a number of complaints, some commentators offered other explanations: Doctor Who is about to air its thirteenth season in sixteen years, a relatively high rate of output for the BBC and British television in general. "Franchise fatigue" was blamed for the Star Trek franchise flaming out in 2005 (ironically just as Doctor Who was returning after sixteen years off-air), after seventeen years of continuous production and it might be that Doctor Who has simply become over-familiar and safe, with kids no longer excited about the show as they were during the Christopher Eccleston and David Tennant years.

Additionally, Doctor Who finds itself in a very different competitive landscape to when it relaunched in 2005. Back then, the BBC gave the show the budget to at least try to vaguely compete with procedural, network American series (Doctor Who reportedly was given a then-generous budget of around $1 million per episode, compared to the $2-3 million of an American network show like, say, Battlestar Galactica or Star Trek: Enterprise). Between 2005 and 2010 the show was given budget bumps to stay competitive, but it suffered budget cuts and freezes in the wake of the financial crisis. These have reportedly remained in place (especially as the amount of money the publicly-funded BBC spends comes under more scrutiny), which due to inflation means that the show has been effectively suffering continuous, annual budget cuts for the last decade.

These have resulted in the show taking increasingly obvious cost-cutting measures, including reducing the number of episodes per season and increasing the gaps between seasons to audience-infuriating levels. At the same time, the competition has started coming from streaming and premium cable, with shows like Star Trek: Discovery and The Witcher spending seven times the budget per-episode than Doctor Who. Amazon's even more expensive forthcoming Wheel of Time and Middle-earth shows could fund an entire season of Doctor Who for less than the cost of a single episode. Much like in 1989, when the BBC "rested" Doctor Who in the face of absurdly superior overseas fare, Doctor Who is looking increasingly threadbare compared to its contemporaries.

Officially, the BBC is saying that Doctor Who will continue and a new actor and showrunner will be announced in due course. Before then, the thirteenth season will air this autumn with six episodes (the lowest number in the show's history, due to COVID restrictions) forming one continuous storyline. Three TV specials will follow next year, airing on New Year's Day, around Easter and either at Christmas or New Year's Eve 2022, with the Fourteenth Doctor taking over at that point.

Maybe this time we'll get writers who can actually write a show like Doctor Who. The writing has been unimaginative dross for years, the reason Jodie doesn't have a stand-out episode is because her best episodes would be filler in earlier seasons. At least Capaldi had Heaven Sent.