Seventeen years ago, the world was devastated in an unexpected nuclear war. People are attempting to rebuild, but they are at the mercy of raiders and pirates. One remote community in Hope County, Montana are under siege by a group of thugs known as the Highwaymen. To survive, they call for support from a group determined to rebuild civilisation. Forming an alliance, they reluctantly conclude to stop the Highwaymen they need the help of a third faction...the surviving members of the cult known as Eden's Gate. An alliance of convenience needs to be formed to drive out the lawlessness, and put right what went wrong a long time ago. 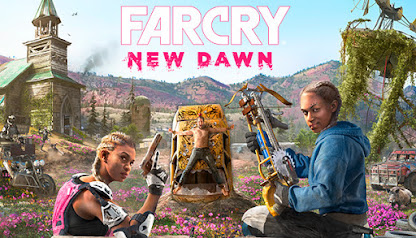 Far Cry: New Dawn is the latest game in the Far Cry series (at least until the release of Far Cry 6 later this year) and is the third stand-alone expansion in the series. Ubisoft are determined to get the maximum worth of their development money from this series, so for the last three titles in the franchise they've re-used the previous game's map and set about creating new story from the same source material. Blood Dragon drew on Far Cry 3's map and design, though in a different genre, whilst Primal re-used Far Cry 4's map in a visit to the Stone Age of tens of thousands of years earlier. New Dawn similarly repurposes the map and many of the assets, flora and fauna of 2018's Far Cry 5, but this time in a direct sequel, if not a continuation, of the former game.

Far Cry 5 had a rough reception, with fans and critics praising its graphics, stealth and combat but criticising its bitty, poorly-characterised story, incomprehensible pacing decisions designed to make playing the game as obnoxious as possible and its utterly surreal, non-sequitur ending. Having played New Dawn at least some of the problems are now much clearer: Far Cry 5 is a narratively incomplete game that punts its proper finale off to this sequel, which oddly was not mentioned anywhere in the marketing on release and one feels it perhaps should have been.

New Dawn at least acknowledges some of the criticisms of its forebear. You'll be happy to know that at exactly no point in this game are you inexplicably kidnapped from a helicopter a thousand feet in the air, surrounded by allies, by the bad guys who then inexplicably let you live to murder all of them later on. If you don't want to follow the main story and just want to dick around in the open world shooting rabbits, you are free to do that with no penalty. The game, belatedly, understands that an open-world game means giving the player the choice to do what they want to do, when they want to, and backs off from ramming its narrative down your throat.

That said, the story is somewhat more coherent and interesting this time around, though not exactly original. You are called in to help build the town of Prosperity up and defend it from attack. You can upgrade its walls and services, such as a helipad, herb-growing garden and medical facilities. These not only make the town more defensible, but also impact on yourself: in a nice touch, upgrading Prosperity upgrades your own stats, so updating the medical facility means you enlarge your own health bar. At various points you can take on a main story objective to push the story forwards, although be warned that the storyline is quite short and pushing forwards with it too decisively will make the experience end relatively quickly.

The moment-to-moment gameplay is very similar to Far Cry 5. You'll be attacking outposts and capturing them for the resistance, seizing their supplies to improve your own war machine. In a nice touch, you can now abandon outposts and let them be re-taken by the enemy, so you can attack them again and get even more supplies (including the very rare ethanol, which is needed to upgrade Prosperity's facilities). Every time you do this, the outpost is refortified even more heavily than before, creating an escalating sense of challenge. There are also plenty of much smaller sites of interest you can investigate and ransack for supplies, often with some stories to discover along the way via notes and audio logs.

Although the game uses the Far Cry 5 map, it's a now a post-apocalyptic setting (with some surface similarities to the Fallout series). Some parts of the map are no longer accessible, having taken direct hits from nukes at the end of the first game and now covered in radiation, whilst the wildlife has been mildly mutated. Some areas are now flooded. The most striking change are flowers, which are now coloured purple and give the landscape a dramatically different look and feel, even though the topography is identical. Newer buildings have been erected in areas where in Far Cry 5 there was only grassland or forest, whilst older buildings from the previous game are now overgrown or partially collapsed. The new feel to the game is quite well-done, and exploration feels more rewarding.

Stealth and combat is still the cornerstone of the Far Cry experience and both are reasonably well-handled, with satisfying gunplay and the relative scarcity of supplies making some old tactics a bit harder to implement; there is no silenced sniper rifle in the first weapons tier, meaning it'll be a while before you get your hands on one, which encourages a change in tactics. NPC allies are also less overpowered than they were in Far Cry 5, meaning no more calling in tactical air strikes to wipe out an outpost before you wander in and take it over. However, I did encounter more problems with hitboxes in New Dawn than any prior game in the series; several times sniper bullets went straight through enemies without harming them, which is a very strange problem, one not present in earlier games in the series (including the near-identical Far Cry 5).

To pump out its otherwise short playing time, the game has the usual roster of activities (including hunting and combat challenges, a small number of treasure hunts, stealing enemy fuel tankers, freeing prisoners etc) enhanced by a new idea: Expeditions. These are short, focused missions taking place in completely new locations off the main map. These include objectives like assaulting a beached aircraft carrier captured by the enemy; salvaging the crashed International Space Station; and ejecting enemies from a flooded amusement park in Louisiana (which I was not aware was in comfortable helicopter range of Montana, but okay). These are fun missions, but surprisingly easy and with very few enemies to fight off. In fact, it's completely doable to just rush to the objective, then to the evac zone without even engaging the enemy (perhaps only to fend them off whilst waiting for the chopper to arrive). I discovered later on that this is because the missions are supposed to be repeated like the outposts, with each mission getting a lot harder each time. This way they get 21 Expeditions out of just 7 locations (the same as getting 30 outpost missions out of just 10 outpost locations). I kind of respect the idea - getting the most out of limited and expensive assets is sensible - but in practice it means that you're not seeing these locations at their best the first time you visit them, which doesn't give much reason to return. You can also satisfyingly finish the game by visiting each Expedition location only once and doing the Outpost cycle maybe twice at best.

Eventually, once you've upgraded Prosperity, retaken the outposts a couple of times and completed all the Expeditions, you can press on with the story. As with most Far Cry games, the writers have tried to create iconic villains, this time around a duo of dastardly sisters, Lou and Mickey. They're better adversaries than Far Cry 5's godawful Seed family but still not that particularly interesting. Even worse, the game brings back the aforementioned godawful Seed family in its closing chapters, which I could have done without. Still, at least New Dawn rounds off this most tedious of storylines for good.

New Dawn is not a long game - seeing everything of interest in the game will take you south of 25 hours - but it does pack a more condensed and focused version of the Far Cry experience into an accessible package. It's not as obnoxious as Far Cry 5, and its combat and core gameplay loop is fairly enjoyable. However, it is straining at the limitations of obvious budgetary and time limitations, forcing you to repeat mission tasks and locations rather than just giving you more mission and locations of interest. I'm also not a huge fan of the developers using New Dawn to fix problems from Far Cry 5 instead of fixing the mothership game itself, although I suppose this is better than the problems going resolutely unignored.

Far Cry: New Dawn (***½) is a solid, medium-sized entry to the series and provides a good few hours of enjoyable action gameplay. However, the format that the series has employed through no less than six games since Far Cry 3 is starting to creak from overfamiliarity, and it'll be interesting to see if the forthcoming Far Cry 6 can freshen things up at all. The game is available now on PC, X-Box One and PlayStation 4.