Reports of crimes being carried out in Hope County, Montana, by a religious group known as the Project at Eden's Gate has led to an investigation by the US Marshals. A group sets out to arrest the cult's leader, Joseph Seed, only to find themselves outgunned and forced to flee. The cult locks down Hope County, triggering a small-scale conflict between the religious fanatics and the local, well-armed populace. With the outside world curiously uninterested in the conflict, it falls to one of the US Marshals to organise the locals and take the fight to Joseph Seed and his followers. 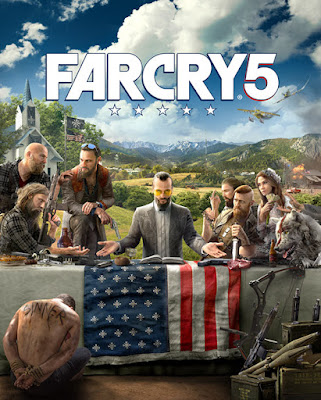 The Far Cry series has, to date, delighted in taking players to far-flung corners of the globe. Far Cry and Far Cry 3 were set on remote islands, Far Cry 2 visited Africa and Far Cry 4 took place in the Himalayas. Far Cry: Primal was set in the Stone Age and Far Cry: Blood Dragon was a neon-drenched SF fantasy. Far Cry 5 differs from its forebears by bringing the game home (to many players), to the United States itself. This immediately adds an element of familiarity to the game: no longer are you an interloper, a visitor to strange lands (apart from the fourth game, where you played a native returning home after a long absence), but the people, the landscape and the culture are immediately more familiar.

Also familiar is the gameplay. The Far Cry apple has not fallen far from the tree at all. Once again, you have a large map which is covered in icons directing you to missions, side-quests, optional activities, enemy strongholds and various characters. There are multiple rebel factions - three in this case - and you can help them defeat the bad guys and eventually win the war. There are some changes to the formula, though. The increasingly silly towers you had to climb to open up each new region have disappeared and the game now tries to be more organic in how it presents you information: rebel soldiers will talk about a missing ally or rumours of another outpost which adds that information to the map; stealing maps from enemy strongholds will also open up more information about the world. Far Cry 5 tries to be a more dynamic game in how you find out information rather than following the same old Ubisoft formula yet again. 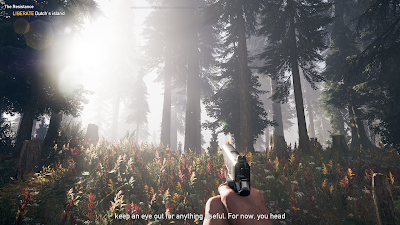 Still, these improvements are fairly minor and not entirely successful: it is far, far easier now than in previous games to simply miss stories, side-quests and characters, which is rather bizarre. More interesting is the decision to mix and match ideas from previous games. Unexpectedly, this game reaches back to tap the Far Cry 2 idea of "buddies", special characters you can recruit (usually by doing missions for them) at key moments in the game and then summon them to help you out later on. They can be injured in battle, but you can revive them and vice versa. The game can also be played co-op, with the two players taking on similar roles in helping each other out. It's a nice idea which is often hilarious - your potential buddy pool includes a dog, a diabetic bear and a puma - but is also overpowered. One of your buddies is a pilot and helps you out from the air, allowing you to simply ask him to bomb the living hell out of an enemy compound before waltzing in to claim it. The enemy AI is also often bewildered by attacks coming from different angles and can be divided and eliminated very easily even on the hardest difficulty settings. Helicopters are also monstrously powerful: you can take out and liberate an outpost in seconds using a chopper whilst going in on foot might result in a solid quarter of an hour of infiltration, combat, takedowns and dealing with reinforcements.

Gunplay and combat is pretty satisfying. The Far Cry series is the biggest-selling story-focused first-person shooter series of all time, with sales of well over 40 million. Shooting is solid, the new helicopter controls are excellent and combat is the usual mix of long-distance spying and recon followed by the rush of attacking outright, with perhaps the occasional stealthy infiltration thrown in to mix things up a bit. 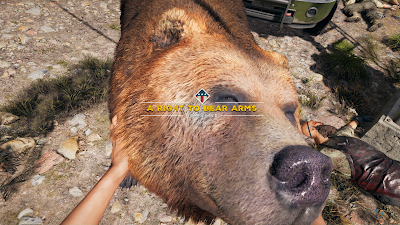 Far Cry 5's trump card is its upgraded and severely enhanced graphics engine. The game is gorgeous, comfortably the best-looking game in existence right now. The forests are breathtakingly atmospheric, water and fire effects are incredible, and the game is often a joy to simply wander around on foot, on quad bike or by boat. Far Cry 5's map is not particularly large, but it does mix in a nice transition from the mountainous north to the flatter south, covered by vast farms, and the heavily forested east. The environments of this game are fantastic.

So good combat and nice environments to fight in, and this goes some way to making Far Cry 5 a very worthwhile purchase. But then the game not so much falters as falls over and bursts into flames.

Far Cry 5 is an open-world game, which means it's up to you where you go, what missions you tackle and what optional activities you partake in. If you want to get through the main story as fast as possible, you can do that in about 15 hours or so, but if you exhaustively want to do everything you can in the game you can comfortably triple that. But the problem is that the game seems to get antsy if you go more than five seconds without something happening. Enemies are spawned constantly, with cars and trucks materialising (sometimes quite literally a few feet away, which is disconcerting) on the road in front of you, cultists on quad bikes appearing on the dirt tracks and hostile wildlife such as bears roaming the woods. Far worse is when the game's story decide it's sat on the sidelines for too long and decides to railroad you into the next chapter of the game. 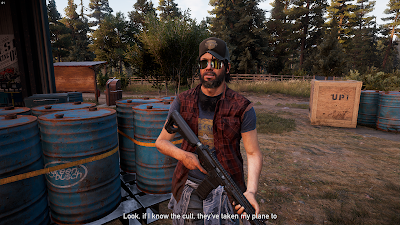 This is extraordinarily frustrating. Killing enemies, liberating outposts, and destroying cult shrines and vehicles all adds to a "freedom meter". At key points this meter will trigger the next part of the game's story. Unless you commit to not killing enemies when attacked and simply running away something interesting happens, there's no way to avoid filling up this meter and thus continue the story. Even worse, almost every major story event in the game requires you to be kidnapped, which is...ridiculous. You can be kidnapped at random, anywhere, any time, even from the cockpit of a helicopter 2,000 feet up with two buddies sitting right next to you. You wake up in an enemy base and have to escape. This happens nine times in the game. Why don't the cult just kill you outright? No idea. One of the game's three mini-bosses is kind of trying to use you for their own ends and it sort of makes sense they'd spare you, but the other two should have killed you without a nanosecond's hesitation. That Austin Powers scene with Scott offering to go get a gun comes to mind repeatedly.


It doesn't help that Far Cry 5 is badly written - the three mini-bosses and the main villain howl Biblical quotations and cliches at you in the most predictable manner possible, and your allies rarely say anything that sounds like a real human would remotely say - and largely lacking in memorable characters. Far Cry 3 and 4 had great villains in the form of Vaas and Pagan Min, but the Seed family are mind-numbingly tedious in comparison. The much-vaunted "topicality" of the game also never appears, and the game fails to say anything interesting or original about the US or the current political moment in history at all. This is probably for the best, but it does row back on some of the pre-release marketing. 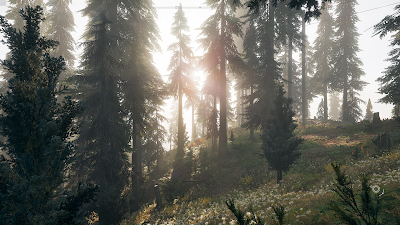 A word must be reserved for Far Cry 5's ending, which is comfortably the most illogical, bizarre and incongruous conclusion* to a major game franchise since Mass Effect 3's. The ending relies on you listening to radio messages at key moments in the game, but if you aren't near a radio or if the radio is turned off, you won't hear the messages. Even worse, that excuse is undone by you having contact with a senior American intelligence agent who, you'd assume, would be in the know about what was going on but clearly isn't. Like Mass Effect 3 before it, the ending of Far Cry 5 makes you feel like everything you did in the preceding 15+ hours was utterly worthless and pointless, leaving a bad taste in the mouth and little urge to replay the game or even finish off the remaining side-quests (the game generates a save set before the ending so you can go back and address unfinished business if you want).

Another issue that Far Cry 5 has to deal with, and does so badly, is the increasing muddling of the series focus from game to game and the threat of the competition. The Far Cry franchise's "thing", the thing it does better than anything else, is first-person combat in a freeform setting far away from linear corridors, realised with cutting-edge graphics. However, feature creep has seen side-quests, animal-taming and hunting, buggy-racing and, in this game, helicopter gunships and even fighter planes added to the mix, to the point where the series feels like it wants, badly, to be Grand Theft Auto. This doesn't play to the series strengths and makes the game feel more generic. Another major problem, much moreso for Far Cry 5 than any previous game in the series, is the looming presence of the Just Cause series. Just Cause 3 does everything that Far Cry 5 does, including having aircraft, helicopters, rebel armies you lead into battle, chaos meters, base assaults, and does it better in a far larger and more varied world, with a much greater sense of fun and no story barging in and seizing control away from you once an hour or so. Far Cry 5 has better graphics and psychopathic bear companions, but that's about it. On every other front, you shouldn't even think about checking out Far Cry 5 without trying Avalanche's action-comedy epic first. 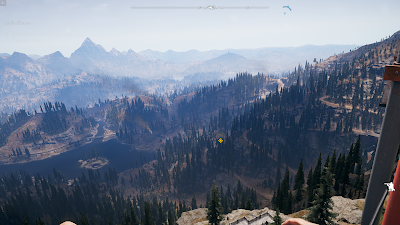 So, Far Cry 5 is a beautiful, stunning-looking game with very good and solid combat, and some great moments like rushing into battle with a friendly diabetic bear named Cheeseburger. It is also bizarrely at its best when it's at its quietest and most peaceful. But the story is garbage and doesn't make an iota of sense, which would be bearable if the plot doesn't continuously keep pushing itself in your face whilst you're playing whether you want it to or not. It's a game that plays bait and switch with you constantly and which takes control away from you and pushes you into doing things you don't want to. Never before have I played a game that's so good when it's good and so appallingly obnoxious when it's terrible, before rounding off things with an ending which is a giant, smirking middle finger to the player.

Far Cry 5 (***) is a deeply frustrating game which does so much right and then not so much shoots itself in the foot as blows both feet off with a rocket launcher. A very cautious try before you buy, or wait for the budget version (and hopefully a mod or patch that eventually mitigates the game's worst excesses).

The game is available now on PC, PlayStation 4 (UK, USA) and X-Box One (UK, USA). Three DLC expansions are due for release later this year, although like Blood Dragon they will be fantastical episodes set outside of series canon.


* Although a Far Cry 6 seems likely, based on Far Cry 5's early and impressive sales, the ending of 5 suggests it will be a very different kind of setting. I'll try to get a more thorough analysis of the game's bizarre ending in another post.
Posted by Adam Whitehead at 19:51