The popular and influential Japanese anime Cowboy Bebop celebrates its 20th anniversary today. The 26-episode series debuted on 3 April 1998 with the transmission of the second episode; the series was broadcast out of order, resulting in low ratings and the show's cancellation after only twelve episodes had aired. The series aired, in full and in proper production order, the following year and immediately picked up significant critical acclaim. In 2001 it became the first anime to air on the American Adult Swim channel, introducing a whole new American audience to the genre. 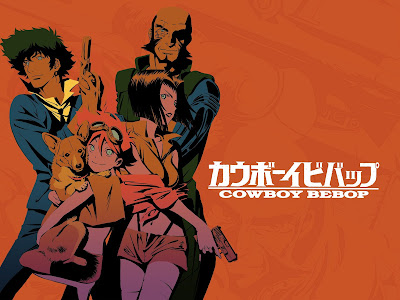 Cowboy Bebop is set in the year 2071, when the Solar system has been colonised and Venus and some of the moons of Jupiter have been terraformed (most notably Ganymede, which becomes the key setting for many episodes). Hyperspace gates link the planets, allowing for rapid travel across the system. Fifty years earlier, the first gate, located in Earth orbit, malfunctioned and exploded, shattering half the moon and sending billions of asteroids into orbit around Earth (and some onto collision courses), almost sealing the planet off. The rest of humanity has scattered across the planets.

The show follows the adventures of the spacecraft Bebop, a starship/boat hybrid. At the start of the series its only crewmembers are odd couple Spike Siegel, a former Red Dragon Syndicate criminal, and ex-cop Jet Black, who are now working as bounty hunters or "cowboys" in the show's parlance. The crew rapidly expands over the course of several episodes (a similar way of introducing the main characters as on Blake's 7 - itself a precursor of Cowboy Bebop - and Babylon 5) with the arrival of the beautiful amnesiac Faye Valentine, "data dog" Ein and Ed, a young child who is also a genius computer hacker.

Cowboy Bebop is notable for its Western influences, particularly several episodes which are clearly homages to film noir. The show has an incredibly eclectic soundtrack, courtesy of genius composer Yoko Kanno, which takes jazz as its main inspiration. Other episodes feature country, rock, classical, electronic and even heavy metal influences. The show also relaxed the obsession with detailed story arcs other anime series suffered from, instead consisting of mostly stand-alone episodes with a couple of recurring character arcs (including Faye's search for her past and Spike's repeated confrontations with his friend-turned-nemesis, Vicious).

Cowboy Bebop is also notable for how little of it there is. Director and co-creator Shinchiro Watanabe was keen not to milk the franchise, so designed it as a story with one definitive ending. A couple of years later he did return to direct a movie (which takes place before the final episode of the series proper), and a two-volume manga of the series was created but that's it. Watanabe has resisted making a sequel, reboot or continuation ever since. This relatively limited amount of content, together with the show's less-serialised nature and Western influences, has made Cowboy Bebop a much-recommended "gateway show" to the world of anime, being light on the insane tentacle monsters and brain-melting, convoluted backstories some other shows in the genre are known for.

The show has picked up significant critical acclaim and celebrity followers: Quentin Tarantino, Rian Johnson and the late Robin Williams were all big fans of the show. A live-action version of the show has been mooted for the last year or so, whilst some believe that the show was an influence on Joss Whedon's Firefly and the animated series Archer (particularly the use of music and the very similar title sequence).

By random coincidence, I've been watching Cowboy Bebop for the past couple of weeks and am about to wrap up the show, so expect a review later this week. In the meantime, congratulations to the cast and crew of Cowboy Bebop for having created something that still means a lot to people twenty years later and, impressively, not having run it into the ground with sequels and reboots.
Posted by Adam Whitehead at 19:09

The best thing about Cowboy Bebop IMO is how it manages to have so many different styles and genres while still feeling like the same show and not losing its identity.

There's noir episodes, straight comedy episodes (cowboy andy and mushroom samba, anyone?), serious drama/plot episodes, horror episodes (periot le fou)... and I'm sure I'm forgetting some. Plus the huge musical awesomeness and variety, as you mentioned. Also Bebop has one of the best English dubs in anime history, so that always helps, too.