The Barbed Coil by J.V. Jones

The formidable warlord Izgard has crowned himself King of Garizon and donned the Barbed Coil, the symbol of Garizonian rule. As Garizon's armies muster and prepare to invade the neighbouring kingdom of Rhaize, Camron of Thorn takes it upon himself to raise a defending army. Figuring strongly in his plans is Lord Ravis, the mercenary who engineered Izgard's rise to power. No-one knows more about Izgard's plans then Ravis. But the recruitment is complicated by the arrival of a mysterious woman called Tess, who claims to be from a distant land called California... 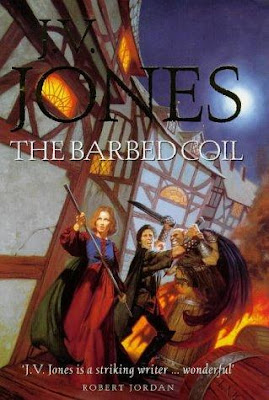 One-volume epic fantasies are a rare beast. The building of an entire world, the development of not just multiple characters but entire cultures and empires is something that can eat up not just hundreds, but thousands of pages. Commercial factors also convince many fantasy authors to flesh out their worlds for sometimes dozens of books at a time, cashing in long after the magic of the setting has gone.

The Barbed Coil is a rarity, then. It builds up a major military conflict between several nation states, develops an original magic system (based on the idea of painting and illumination) and features an expansive cast of both "good" and "bad" guys, all of whom are painted in some depth. It's a story with quiet moments and also packed with fast-moving action and some impressive magic, all delivered with Jones's formidable skills.

The Barbed Coil was released in 1997, between her debut Book of Words trilogy and it's sort-of sequel series, The Sword of Shadows. Book of Words was decent, with a nice improvement between volumes, but a far cry from Sword of Shadows, which is one of the finest epic fantasy series of the last generation (bearing in mind it's still unfinished). The Barbed Coil is a complete standalone, set in its own world unrelated to the two big series, telling one complete story with a beginning, middle and end. And it's a good one.

The novel delves into the character of Tess, someone who finds herself drifting through life on Earth with no purpose until she is borne off to a fantastical world and discovers that she is a smaller part of a much bigger pattern that goes back before her birth. Tess's journey of discovery is traditional, but well-handled. It's a pleasant surprise that Tess is less traumatised or freaked out by her arrival on this world than relieved, as various illnesses she was suffering from on Earth have disappeared in transit (shades of Thomas Covenant here, to a much less wrought degree). Our two male protagonists, Ravis and Camron, are also well-drawn characters, neither traditional heroes but who are drawn into having to choose whether to stand against Izgard, join him or flee. We also spend significant time with Izgard, his young bride Angeline and his scribe Ederius, who form an exceptionally well-written, monstrously dysfunctional triumvirate.

One of Jones's skills is combining the best elements of high fantasy - good fellowship, a sense of humour and a genuine ability for heroism - with the darkest - war, savagery and betrayal. The Barbed Coil bears comparisons with K.J. Parker, particularly the exacting detail given to the painting and illuminating side of things and the disturbingly complex relationship between Ravis and his brother, although it's not quite as unrelentingly grim as Parker's work. Still, that's not bad company to be in.

The Barbed Coil (****) is J.V. Jones doing what she does best, building an interesting world populated by complicated people, fleshed out with an interesting take on magic. The book is available now in the US but, regrettably, is out of print in the UK (even on Kindle). Hopefully it will become available again at some point.
Posted by Adam Whitehead at 19:38