The series finale of Sense8 has been given an airdate. The movie-length grand finale to the story will air on Netflix on 8 June. 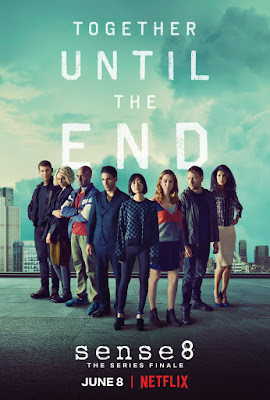 Netflix cancelled Sense8 last year after, curiously, airing the second season with almost no marketing, meaning that even big fans of the show were unaware it had returned. Netflix had chosen instead to keep marketing 13 Reasons Why, despite that show already being a big hit, and the need to get eyes on Sense8 being much greater because of its larger budget (Sense8's second season cost an eyewatering $9 million per episode). This was a bit of an own goal, to put it mildly, and after a fan campaign which involved mass rewatches of the first two seasons, Netflix agreed to fund a two-hour finale. This will wrap up the second season's cliffhanger ending and will provide a conclusion to the series overall, despite writers J. Michael Straczynski and the Wachowskis previously saying that the show was meant to run for an additional three seasons.

Some fans are hoping that the finale is successful enough to warrant a third season being commissioned, although that seems unlikely.
Posted by Adam Whitehead at 00:34