Bantam and HarperCollins Voyager have revealed their cover art for the US and UK editions of George R.R. Martin's Fire and Blood (although the UK cover is apparently not finalised yet and there may be some changes prior to publication). 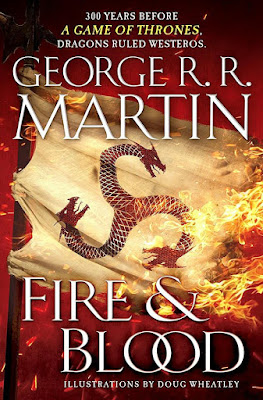 The American cover art for Fire and Blood

Fire and Blood is the first part of a lengthy history of the Targaryen rule of Westeros, covering the period from the Doom up to the regency of King Aegon III, the Dragonbane. The book covers the Targaryen Conquest, the misrule of Maegor the Cruel, the Faith Militant Uprising, the long rule of Jaehaerys the Conciliator and the chaos and blood of the civil war known as the Dance of Dragons.

The book was originally written across three or four months back in 2012 as part of The World of Ice and Fire, but Martin ended up producing way too much material for that book, leaving his co-authors Linda Antonsson and Elio Garcia, Jr. to summarise this material. This is the full, unexpurgated text and incorporates the sections previously published separately as The Sons of the Dragon, The Rogue Prince and The Princess and the Queen.

Martin's plan originally had been to hold back the entire history (including the as-yet-unwritten second half, covering Aegon III's reign through Blackfyre Rebellion, the War of the Ninepenny Kings and the Mad King's downfall in the War of the Usurper, aka Robert's Rebellion) until after A Song of Ice and Fire was completed. However, the material he'd already completed for the first half runs almost as long as A Game of Thrones itself, 989 manuscript pages and roughly 270,000-odd words (compared to AGoT's 1,088 manuscript pages and 298,000 words), so the work would have been published in two volumes anyway. Martin has no plans to write the second book as yet since it would by definition include major spoilers for the Dunk & Egg stories and also for A Song of Ice and Fire itself. 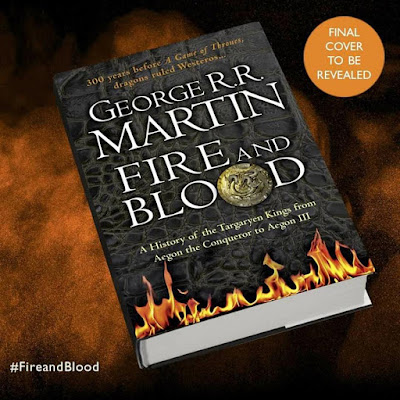 The (working) UK cover art for Fire and Blood.

Martin also confirms that work remains ongoing on The Winds of Winter, but seemingly confirmed in the same blog post that the book will not be published in 2018.

Fire and Blood will be published on 20 November this year and will feature 75 black-and-white illustrations by Doug Wheately.
Posted by Adam Whitehead at 18:28

Honestly, I just don't care any more. Life moves on and I've lost interest. It was the same when The Wheel of Time went into a downward spiral and I just stopped reading it, with no regrets. I might read The Winds of Winter out of curiosity but if he takes another ten years to write the final volume, well I'll be pushing 80 and won't even remember what happened in Winter. - Ian

....well, all I'm going to say is this: I'm in dire need of a re-read of the series. However, I don't want to get the HBO version the books mixed up in my head. SO, the day after the show finishes, I'm going to begin re-reading the books - which will be next year sometime.

It is my hopes that by the time I finish Book 5 OF that re-read; Book 6 will be out, or at least announced. (like how Book 5 was announced in march / April of 2011, and it came out a few months later in July)

My anger at him not completing the series was replaced by apathy a long time ago.