J.R.R. Tolkien isn't letting having died forty-six years ago hold back his writing career. In August he will publish The Fall of Gondolin, as edited and compiled by his son and literary executor Christopher Tolkien. 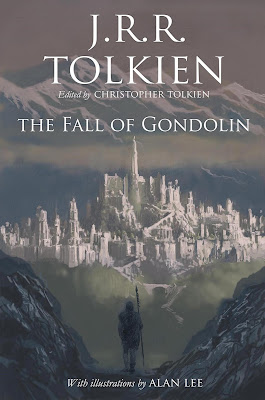 "The Fall of Gondolin" was the very first story Tolkien ever wrote about Middle-earth, writing it down whilst on convalescent leave following the Battle of the Somme in late 1916 or early 1917. The story was written "in army huts, crowded filled with the noise of gramophones." Sometimes cribbing manuscript paper from any source to hand (part of the story is written on the back of a paper outlining the "chain of responsibility in a battalion"), Tolkien wrote and completed the narrative, the first instalment in a work he called The Book of Lost Tales. This book would collect together various stories from an ancient work between a dark force and the wise and powerful "Gnomes" (named for gnosis, or wisdom) who opposed it, through the framing device of a hapless mariner washing ashore on an island called Tol Eressea and learning about the ancient conflict. The original "Fall of Gondolin" was written in a severely archaic and studied style, which Tolkien later found over-laboured.

By 1930 Tolkien had abandoned the framing device and instead planned to tell the story "straight", under a new title, The Silmarillion, which required a total rewrite (including replacing the name "Gnomes" with "Elves," after the 1930s craze for garden gnomes made the name unbearable to him). However, he was interrupted first by a children's story he had started writing for his children, which became The Hobbit, and then urgent publisher demands for a sequel, which became The Lord of the Rings. Whilst working on both books, Tolkien did continue to develop The Silmarillion, but increasingly came to write the story in very broad brush strokes, lacking the fine detail of "The Fall of Gondolin." "The Fall of Gondolin" therefore only existed as the archaic 1917 manuscript (later amended and edited by Tolkien circa 1920) and a very brief summary of the story that Tolkien had written as part of the Grey Annals of Beleriand (which formed much of the published Silmarillion).

Around 1951, after The Lord of the Rings had been completed but whilst its publication was in question, Tolkien wrote a new version of the Gondolin story. His plan had been to depict the fall of the city in a detailed, more sophisticated mode of writing more akin to Lord of the Rings. However, after depicting the hero Tuor's arrival at the city gates and his first meeting with Ecthelion, Warden of the Grey Gate, Tolkien abruptly broke off the narrative and did note complete this version of the story. This incomplete narrative - totalling just 34 pages and retitled "Of Tuor and his Coming to Gondolin" - forms the opening part of Unfinished Tales (1980), with Christopher Tolkien noting that his father's failure to complete this story may rank as the greatest tragedy of his literary life.

Christopher Tolkien began publishing all of his father's drafts in The History of Middle-earth series. The original 1917-20 version of "The Fall of Gondolin" finally saw print in The Book of Lost Tales, Part II (1984), the second volume of the series. A 120-verse poem, "The Lay of the Fall of Gondolin," also appeared in The Lays of Beleriand (1985), the third volume of The History of Middle-earth.

The "new" Fall of Gondolin will, as Beren and Luthien (2017) did before it, contain all of the extant versions of the text, collected together with editorial commentary and artwork by Alan Lee. There'll be nothing new here, but it should be worth it for the Lee artwork alone.

The Lay of the Fall of Gondolin would be new material - it's not in the Lays of Beleriand. On the other hand, we know that it is short and unfinished.

Doing a back-of-the-envelope page count analysis suggests that there simply isn't enough extant material to pad out the book, short of font manipulation and extended introduction:

This opens the door for some other new content, even if it is only minor.

I enjoy a nice edition as much as the next person, but I was pretty disappointed when I discovered that this book and the previous one didn't contain any material I don't already have.

Oh, I have to say I'm pleased, Adam.
The man's spent fifty years almost on releasinga and explicating on his father's work, in a very dignified and competetent manner, and, in addition to that, has been involved in the Tolkienian world since childhood. If there is anybody at all that can be said to be a primary audience of J.R.R. Tolkien's work on Middle-Earth, it is unquestionably Christopher. He is far from a co-author (except maybe in the published Silmarillion of course), but these stories have been in his head and in his hands since he was a child, and I do think people overlook that emotional connection, not just to his father, but to his father's work, when discussing the Tolkien estate.

That's why I'm so pleased - he's well past ninety now, right, and so it's great that he's not only published some great histrorical things on the development of the Arda mythos, but that in this last decade, he's been able to top it off by publishing the three great stories of the Silmarillion cycle: Hurin in 2008, Beren and Luthien just last year, and now the Fall of Gondolin. It's a shame that the latter two don't exist in full-fledged form, but copy-right will go out one day, and at that time I am sure that we will all be inundated with wonderful (and less wonderful) treatments of the Tolkien myths, some hewing to that classical style, some boldly diverging.

In the meantime, this is a a fine finish to an illustrous career of legacy preservation, and a nicely symmetric one at that.

I would be way more exited if this was going to be like "Hurin", but the "Beren and Luthien" aproach is just anoying to read.

This is finally out in Australia in paperback. Much excite.