Amazon is in talks with Peter Jackson about him possibly being involved in the new Lord of the Rings TV series they are developing. 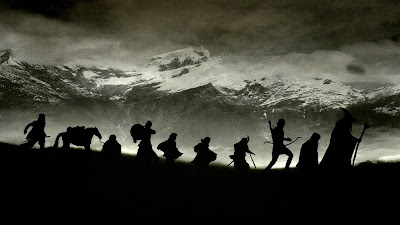 As previously reported, Amazon, New Line and the Tolkien Estate came together late last year to commission a new TV series which will be set between The Hobbit and The Lord of the Rings. Due to the rights issues with MGM (which were overcome only with incredibly expensive difficulties and ever greater creative ones to make the three Hobbit movies), the new TV series will draw on Lord of the Rings and its appendices alone.

Peter Jackson was not involved in these initial talks and it was unclear if the TV series was going to be set in the same continuity as his existing movies, meaning they would use the existing production design, or if they would be complete reboots, potentially paving the way for a fresh take on the classic Lord of the Rings story once the initial prequel series wrapped up. Based on the new report from The Hollywood Reporter (print edition), it sounds like the series can now officially take place in the same continuity as Jackson's existing films. This potentially opens up the possibility of Jackson, Philippa Boyens and Fran Walsh contributing scripts, and Weta Workshop providing the effects for the project.

Jackson's full role is unclear, but it sounds like it may be a producer and advisory role. I suspect Amazon will also try to tempt Jackson to direct the first episode to attract the maximum amount of attention to the project. Jackson's slate of projects is as full as it's been for years - he's working on a TV series based on Naomi Novik's Napoleonic War fantasy Temeraire, is producing a new remake of The Dambusters and is due to direct and co-direct the second and third Tintin movies for Steven Spielberg - but these projects have also all been on hold for a while and it's unclear what Jackson's current venture is, with shooting on the Mortal Engines movie (which he produced) wrapping last year.

Jackson's involvement will likely result in mixed reactions: the Lord of the Rings trilogy was both critically and commercially acclaimed, but the Hobbit trilogy was critically mauled, particularly for the decision to expand a very slim novel (only one-fifth the length of Lord of the Rings) into three long movies. However, this latter development was apparently forced on Jackson by the studios involved against his wishes for a two-movie project, particularly MGM, who are not involved in the new TV series. In fact, the idea of a "bridging story" linking The Hobbit and Lord of the Rings was developed by Jackson and Guillermo Del Toro some years ago as a stand-alone movie, and it could be that Amazon's new project will now draw on the ideas they developed for that story.

Amazon's decision to tap Jackson was likely driven by the need to get the ball rolling on the series. No showrunner or producer is so far attached to the project and there is no script being developed. Even the premise of the series is unclear, with some believing it may focus on the adventures of the young Aragorn serving in the armies of Gondor and Rohan, or Gollum searching for the Ring, or a combination of several ideas. Amazon want to launch the series in late 2019 or (far more likely now) 2020 to allow them to compete directly with Disney's new streaming service, which will be launching with both a new Marvel Cinematic Universe show and the first-ever Star Wars live action TV series (produced by Jon Favreau). With the Disney service likely to also use the full (and vast) Fox TV and film archive, once that deal is cleared, it presents a formidable threat and competition to Amazon and Netflix.

It remains the case that the TV production team will not have access to The Silmarillion, Unfinished Tales, The Children of Hurin or Beren and Luthien (the posthumously-published Middle-earth books), nor to Tolkien's extensive notes and drafts collected in The History of Middle-earth series. Intriguingly, the new deal did require the Tolkien Estate to sign a new rights deal with New Line and Amazon, as the original deal (signed by J.R.R. Tolkien and United Pictures in 1968) did not stipulate TV rights were included and that clarification was required. This marks the first time that the Tolkien Estate has authorised a new screen adaptation of Tolkien material, a position unthinkable just a year ago before Christopher Tolkien resigned from the board of the estate.

More news is expected about the new Lord of the Rings TV series in the coming months.

Correction: The rights to the Temeraire novels have returned to Naomi Novik and Peter Jackson is no longer involved in a screen adaptation.

With apologies (click to embiggen).
Posted by Adam Whitehead at 21:06

Does the Tolkien estate still hold the right to The Silmarillion, et al.? Who would Bezos have to write a check to for those rights?

Yes, they do. The Tolkien Estate currently consists of J.R.R. Tolkien's daughter Priscilla and four or five of his grandchildren (and one of his great-grandchildren, I believe).