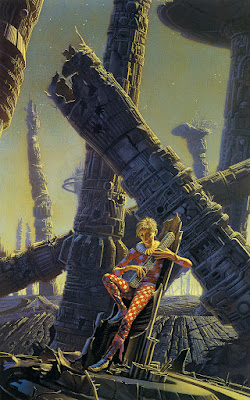 Goyer, who wrote Chris Nolan's Dark Knight trilogy and films such as Blade, Dark City and Man of Steel, picked up the project along with Skydance Entertainment when a HBO version helmed by Jonathan Nolan was shelved (in favour of their Westworld series, which has been a big hit). After several studios considered the series, Apple have picked it up as hopefully their first big tentpole original series.

Isaac Asimov's Foundation saga began with a series of short stories published in the 1940s. These became much better-known when they were collected into three "fixup" novels: Foundation (1950), Foundation and Empire (1951) and Second Foundation (1952), collectively known as the Foundation Trilogy. Thirty years later, after being showered with money from his publisher, Asimov returned to the setting in Foundation's Edge (1982) and Foundation and Earth (1986), the latter of which tied together the Foundation setting with his earlier Robots saga, the Empire trilogy and the stand-alone novels The End of Eternity and Nemesis. Indeed, some readers now believe that Asimov intended for all of his SF work to be part of this setting, where it is not explicitly contradicted (with shades of Stephen King's multiverse). Asimov ended his career with two prequels, Prelude to Foundation (1989) and Forward the Foundation (1992). After his death, the "Killer Bs" of science fiction (Gregory Benford, Greg Bear and David Brin) continued the series with three more prequels: Foundation's Fear (1997), Foundation and Chaos (1998) and Foundation's Triumph (1999).

The Foundation saga is set 22,000 years in the future. The Galactic Empire, which has existed for 12,000 years and brought stability to the human-colonised galaxy (there are no aliens in the setting), is starting to fragment and collapse. Statistician and mathematician Hari Seldon has created a science known as "psychohistory" which can predict the future based on previous historical events. Seldon's calculations suggest that the Empire is going to collapse, and in doing so will plunge the galaxy into chaos that will take humanity 30,000 years to recover from. Seldon proposes an alternative plan, the creation of a repository of knowledge and its scientific guardians who will guide humanity out of the darkness and reduce the interregnum to just a single millennium: the Foundation. The first three books span the first three centuries of the Foundation and explore the Empire's collapse, the emergency of a mutant warlord known as the Mule (whose existence could not be foretold by the Seldon Plan) and the conflict between the Foundation and the mysterious Second Foundation, which has been influencing it from behind the scenes. The later books explore what happens when a Foundation scientist and adventurer discovers both Earth and the existence of other forces manipulating events.

There have been multiple attempts to adapt Foundation over the years but these have foundered on the problems of the series' long chronology, its frequent multi-decade time jumps (which preclude the existence of a returning, regular cast) and the fact it is both extremely dated (earning its current genre fame more from nostalgia than quality) and has been hugely influential on later, superior works such as the Dune series and Star Wars, of which a Foundation adaptation may appear derivative.

It will be interesting to see what Goyer comes up with. I suspect a radically different story to what Asimov portrayed in his novels.
Posted by Adam Whitehead at 10:59