BBC to release RED DWARF and DOCTOR WHO in HD

In an interesting move, the BBC has confirmed they are releasing Doctor Who and Red Dwarf on Blu-Ray in high definition...despite the original shows being shot natively on video, which should make such a process impossible. 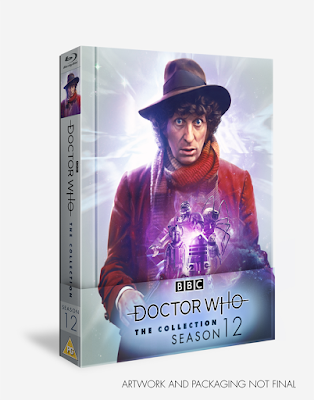 Backing up and as previously discussed at length in our HD remastering discussions for Buffy the Vampire Slayer, The Wire, The X-Files and the proposed (and unlikely-to-happen) Babylon 5 remastering, it has been possible for various TV shows to be natively remastered in HD or even 4K because they were shot on film. Film retains a huge amount of information (as it's also what was used for movies, projected onto massive cinema screens) so getting a very high quality image from the original film source is a relatively straightforward process.

The complicating factor in most American TV shows is that, although shot on film, they were mastered (that is, having music, sound effects and visual effects added) on much lower-quality videotape, which is where the broadcast version of the episode exists. Videotape is impossible to remaster, because the extra visual information simply doesn't exist in the image. If you tried, the image would just come up very blurry with large and visible pixels. So, for shows like Star Trek: The Next Generation, the remastering team had to go back and re-edit every single episode together from scratch, re-add the music and sound effects and redo all of the visual effects from scratch in HD. This was both time-consuming and very expensive.

In case of British television shows which were shot on video - i.e. they never existed on film at all - it was assumed that they would simply never be remastered and would have to remain in standard definition forever. There has been some talk of advanced extrapolation - scanning the original material, blowing it up to HD and then filling in the pixels dynamically with an advanced algorithm - but this appears to be many years away still.

These new Blu-Ray editions appear instead to be "upscales", an attempt to make the episodes appear to be HD through a more primitive process of adding more pixels to the screen. It can be a very variable process, sometimes surprisingly effective and other times disastrous. I'd wait for reviews before seeing how well the upscale has been done.

In the case of Doctor Who, it appears that so far only a "test run" is being done with Season 12, the first season to star Tom Baker as the Fourth Doctor. Originally broadcast from 1974 to 1975, this season was chosen as it features the most popular Doctor and features arguably two of the greatest Doctor Who stories of all time, The Ark in Space and Genesis of the Daleks. The Blu-Ray will also have lots of new special features, including a brand-new retrospective by Tom Baker on his time as the Doctor. It will be released on 11 June 2018.

Red Dwarf's release is much more confident, with Seasons 1-8 being released in a single box set in one go. This will be released on 1 October 2018.
Posted by Adam Whitehead at 22:16

Genesis of the Daleks is a classic episode, but Ark in Space may have been good but it was also gross and reliant on the kind of costumes and effects that probably wouldn't hold up well on any kind of HD style release.

I wish they had chosen 'City of Death' instead... There are just a few scenes that would be problematic, and the rest... maybe they could just put some blurring effects in during mask changes?

I think the idea is that, if this season sells well, they'll do the entire series, so they weren't going to mix stories from different seasons (collecting 26 Blu-Ray box sets rather than 158 DVDs also makes more sense). I mean, this set gives us Ark in Space and Genesis, but it also gives us Robot and Revenge of the Cybermen, which I don't think many people are crying out to see in HD.