Disney and Lucasfilm have confirmed that the next Star Wars animated series, the follow-up to Clone Wars and Rebels, will be called Star Wars: Resistance. 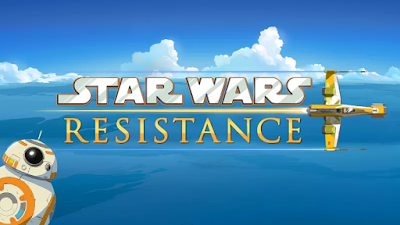 The new show will take place a few years prior to The Force Awakens and sees the discovery of the threat posed by the First Order, with the Resistance being founded to stand against them. The series will focus on the character of Kazuda Xiono, an ace pilot recruited by General Leia Organa and trained by Poe Dameron, along with several other pilots. It sounds like the show's recurring villain will be an earlier-in-her-career Captain Phasma, whilst BB-8 will also show up.

Resistance will be produced by Dave Filoni and many of the same crew who created both Clone Wars and Rebels. However, the new show will employ a different art style, which will mix the 3D animation of the older shows with a cel-shaded anime influence. It sounds like production has been underway on the new show for some months, with it already slated to debut on the Disney Channel this autumn.

Cast-wise, the most exciting news is that both Oscar Isaac and Gwendoline Christie will be reprising their roles from the new Star Wars movies.

This project is in addition to the new live-action Star Wars TV series being produced for Jon Favreau and expected to debut in late 2019.
Posted by Adam Whitehead at 20:54

Sounds good to me. I never quite clicked with Clone Wars, but Rebels ended up great (after a rocky start). I like the fact that they change animation style for each show.

I wonder if this will be like Star Wars does Top Gun, along the lines of the old X-Wing novels?