Today - or, more accurately, some time between today and early May - is the 80th birthday of Superman, the Man of Steel. He debuted in Action Comics #1 which hit newsstands in late April or early May 1938* and has regularly appeared in comics, on TV and in movies almost continuously since then. 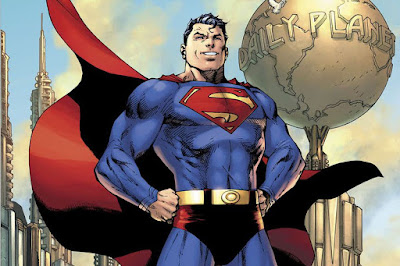 The character was created by writer Jerry Siegel and artist Joe Shuster, high school friends in Cleveland, Ohio. They had begun developing the character privately in 1933, going through many different iterations (including one with him as a dubious alien with mental powers and another where's he's an ordinary guy with no powers, just an incredible sense of heroism). By early 1938 they'd started working for DC Comics and sold the rights to the character to them in return for being published, a decision they would later bitterly rue, as they and their families would battle for control of the rights for decades.

The character debuted in Action Comics #1 and by mid-1939 had migrated to his own spin-off title, Superman. Both Action Comics and Superman remain ongoing today, with Action Comics #1000 also coming out this month (the publication rate of the comic was changed a few years ago to twice a month, apparently deliberately so the 1,000th issue would be published on the 80th anniversary of the character). Superman was an immediately hugely popular character, with the comics selling hundreds of thousands of copies a month.

Although some elements of the Superman mythos were present from the start - such as Lois Lane and the Clark Kent alter-ego - others took time to come together. In particular, Superman's powers and limitations varied wildly from writer to writer. Editor Mort Weisinger, who was in charge of the character and comics from 1941 to 1970, insisted on the development of a coherent world and backstory for the character. This led in turn to the creation of the shared DC Comics Universe, codified in Superman #76 in 1952 when Superman finally met and teamed up with Batman for the first time. After several other run-ins with fellow DC heroes, Superman led the creation of the Justice League in March 1960, alongside Batman, Wonder Woman, Green Lantern, the Flash, Aquaman and Martian Manhunter.

In the 1960s DC Comics was blindsided by the abrupt rise to power of Marvel Comics. Under Stan Lee's stewardship, Marvel was seen as more colourful, more exciting, more current and less staid than the DC characters. Most importantly, the Marvel characters were allowed to have private lives, love lives and be flawed characters, unlike the "perfect" DC heroes. Marvel overtook DC in sales late in the decade and DC rarely challenged them for the title again. Superman was seen as old-hat, but the release of the highly successful Superman: The Movie in 1978 saw the character reassessed. New writers and editors came on board and the comic was taken in a more serious direction; this culminated in 1992 in the Death of Superman storyline, with the issue where Superman "dies" selling over 6 million copies, making it the biggest-selling single comic book issue of all time. Naturally, he returned a few months later.

Superman was first depicted in another medium in 1940 in The Adventures of Superman, a radio drama starring Bud Collyer as the Man of Steel. The radio drama ran for eleven years. Collyer also voiced the character of Superman in seventeen short animated cartoons, produced by Paramount Pictures in 1942 and 1943.

Kirk Alyn was the first actor to play Superman in live-action, in a 15-part Columbia film serial produced in 1948. The serial received mixed reviews, mainly due to the inability to show Superman flying, so these sequences were replaced with animation.

George Reeves became the first well-known actor to play Superman, starting in 1951 in the theatrically-released film Superman and the Mole Men, and then for six seasons and 104 episodes of a TV show called The Adventures of Superman (1952-58). This series was much more successful, mainly due to the use of back projection to show Superman in flight (if somewhat unconvincingly). The show was riding high when star George Reeves tragically died (under bizarre circumstances) in 1959, leading to the cancellation of the series.

In 1978 Warner Brothers released Superman (sometimes called Superman: The Movie), starring Christopher Reeve. The movie was a monster, worldwide hit and spawned three direct sequels: Superman II (1980), Superman III (1983) and the woeful Superman IV: The Quest for Peace (1987), as well as a spin-off, Supergirl (1984). Beginning in the late 1980s a sequence of Superman TV series was put into production, mostly featuring Superman as a young man or at the very start of his days of superheroism: Superboy (1988-92), Lois & Clark: The New Adventures of Superman (1993-97) and Smallville (2001-11).

After a surprisingly long hiatus (despite attempts by Kevin Smith and Tim Burton to resurrect the franchise), Superman returned to the movie screen in 2006 with the patchy Superman Returns, followed in 2013 by the terrible Man of Steel, which marked the beginning of the rocky (to put it mildly) DC Cinematic Universe. Superman returned in Batman v Superman: Dawn of Justice (2016) and Justice League (2017). British actor Henry Cavill portrays Superman in the DC Cinematic Universe, and is notable as the first non-American to play the role.

It's easy to be cynical about Superman. He's an all-American hero who is indestructible, can see through walls and has super hearing, making stories involving him rather bereft of tension (unless the writer resorts to cliches such as robot doubles or kryptonite). Attempts to make the character "dark" or "gritty" misfire for missing the point of the character (most notably in Man of Steel). But at his best, when portrayed by actors like Christopher Reeve and written by good writers with a solid grasp of the mythos, he can be an intriguing and well-developed character. He's also a character who has withstood multiple reinterpretations, from John Cleese's British take on the character (where Superman's spaceship crashes outside Weston-super-Mare rather than Smallville) to Mark Millar's darker Red Son, where Superman was raised in the Soviet Union and becomes a Big Brother-like figure.

The Big S has many more stories left in him and it will be interesting to see where writers take him in the future.

* The confusion is caused by the fact that street dates for "funny books" weren't vigorously enforced in the 1930s. According to The Encyclopedia of Superheroes on Film and Television, the earliest copies of the comic were sent to distributors starting on 18 April 1938 and some bookstores and convenience stores would have put them on sale immediately, whilst others would have honoured the official release date in early May (confusingly, the actual comic's cover date is June 1938).
Posted by Adam Whitehead at 22:26