Paramount has doubled down on its commitment to the Star Trek universe. It has greenlit Star Trek 4, with S.J. Clarkson on board to direct the film. Star Trek 5, meanwhile, is being developed by a team of writers working with Quentin Tarantino. 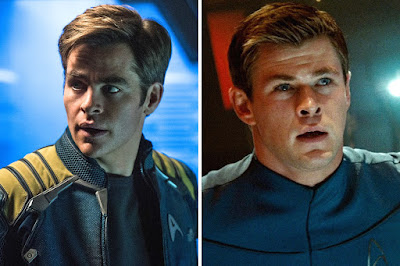 Star Trek Beyond was released in 2016 to reasonable reviews but underperformed at the box office, leading to speculation that Paramount might rest the film franchise. Quentin Tarantino voiced his interest in potentially helming a Star Trek film last year, citing his great love of the original series and The Next Generation and saying he'd draw inspiration from classic episodes such as The City of the Edge of Forever and Yesterday's Enterprise.

Instead, it seems that Paramount has decided to press ahead with the original Star Trek 4 plan, given that Tarantino will be busy for the next year and a half or so with Once Upon a Time in Hollywood. Star Trek 4, based on an idea by J.J. Abrams, is a time travel adventure where Kirk (Chris Pine) and Spock (Zachary Quinto) meet Kirk's father, played by Chris Hemsworth in the 2009 movie. Quinto has apparently already signed on and Pine and Hemsworth are in negotiations. Presumably the rest of the Star Trek reboot crew will also appear, apart from Anton Yelchin (Chekov) who sadly passed away after completing filming on Star Trek Beyond.

S.J. Clarkson cut her teeth in UK television, helming six episodes of the acclaimed 2006-07 drama Life on Mars as well as episodes of Hustle. She subsequently moved to the US and has directed episodes of Heroes, Dexter, Jessica Jones and The Defenders. Clarkson is the first woman to direct a Star Trek movie and only the eighth woman to direct Star Trek at all (following on from Gabrielle Beaumont, Gates McFadden, Nancy Malone, Roxanne Dawson, Kim Friedman, Allison Liddi and Hanelle Culpepper) in its 52-year history.

Quentin Tarantino's Star Trek movie, currently listed as Star Trek 5, is in development. It's unclear if Tarantino's movie will use the reboot cast, will be set in a new version of The Next Generation or will be some other kind of project, but according to the Hollywood Reporter the movie will be set "in a different timeline" to the rest of the franchise.

In related news, filming of the second season of Star Trek: Discovery is underway, with CBS confirming that the season - which will be partially set on the original, Constituion-class USS Enterprise - will introduce uniforms inspired by the original series' classic, colour-coded uniforms. The season is expected to debut on CBS All Access in early 2019.
Posted by Adam Whitehead at 17:16