THE LAST KINGDOM cancelled by the BBC but saved by Netflix

The BBC has decided not to continue with its Saxon-era historical drama The Last Kingdom, based on author Bernard Cornwell's Saxon saga which currently runs to ten novels. However, Netflix have stepped in and will continue the series, with the third season due to air later this year. 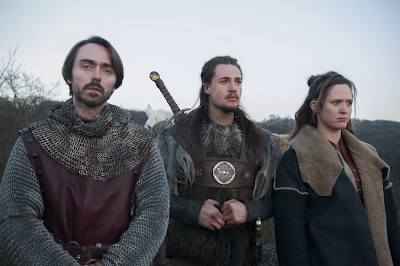 The first season of The Last Kingdom was a co-production between the BBC and BBC America, but BBC America dropped out after the first season, citing disappointing ratings in the US, although UK ratings were strong. Netflix took over as international distributor and co-funder of the series. The BBC has decided not to continue the series, so Netflix have taken over production completely.

The news does make sense, as The Last Kingdom has received good critical notices since debuting. In addition The Last Kingdom gives Netflix a toehold in the historical drama field without the monstrous price tag of some of their other shows, like The Crown and the cancelled Marco Polo. By Netflix standards, The Last Kingdom's budget is very modest and even with a moderate budget increase (which would be helpful to sell some of the bigger action scenes) it would still be one of their cheapest programmes.

Season 3 of The Last Kingdom will air before the end of 2018, with Netflix to make a decision on continuing the programme based on how it fares as a Netflix original.

Slightly paradoxically, the BBC have cited competition from Netflix and Amazon TV as reason why they can't continue production of drama programmes like The Last Kingdom, and have even advised that in the future, predicted budget shortfalls for British broadcasters may threaten shows like Doctor Who and Sherlock.
Posted by Adam Whitehead at 23:34

I think this show is better than Game of Thrones in some ways. Glad it's still going forward.

The Last Kingdom is a brilliant programme. Very well written, directed and acted. Much better than Game of Thrones! Looking forward to many more episodes.

I just so happy I have been waiting for the next episode. Cant wait to see it

Love this series both in book and on TV. It's my favorite in both forms.

I was wondering what happened to this show. Glad to hear Netflix picked it up

Just got done watching season 2 and thrilled there will be season 3.....

Better than Game of Thrones? Get serious.

Love this show even watching series from beginning again...go Netflix for going alone on this series.

Glad I'm still supporting Netflix via streaming AND DVD service, allowing great series like this to be afforded/picked up! Cheers!

Very sad. I've been watching every episode linking the events and pleasantly looking the beautiful places where they filmed and the first class of actors and actresses.

Previews never did it justice.I passed while continuing with a lessened "Vikings"(RIP Ragnar)& the ever quickened GoT rushing to finish as fast as they can.This is a very good show,it just got unnoticed by many early on and that's always sad for the work obviously put into this by everyone involved.

Just finished watching on netflix.... not usually a fan of historical tv shows but absolutely now a fan of THIS
show...hope netfix continues to do it justice...go netflix!!

Nice series, but for some to say it's better than GoT, then they must be dreaming. It's not even as good as Vikings. But I'm glad it will get a third season, beyond that I doubt it will go to a fourth.

I'm so looking forward to this! Go on Uthred!

For big broadcasting companies like BBC, I have to wonder at their total lack of VISION. I am in the Cayman Islands and cannot wait for this series to return. Cancel it? Really? Well, between Lucifer and The Last Kingdom, Netflix will get my money. Hope it has Harlots too!

So y is bbc tv licence still expensive if there saying this. Stop paying starts too much and stop reality rubbish. Tlk is a superb show more interesting than vikings

It really draws you in. The Last Kingdom is a treasure. It's just as entertaining as the Spartacus series.

My husband and I love this series

Love this series,in a par with Vikings and got

The Last Kingdom is so superior to Vikings and GoT. It is historically very accurate which cannot be said for Vikings. Big mistake BBC.

What do BBC spend money on then apart from cooking and dancing programmes?

Well done, BBC. As long as you've got those damned cooking programmes, all else goes to pot - literally......

Love this show!! Thanks Netflix for saving it.

I find it better than Vikings and I love vikings so its right up there with GOT. Been waiting anxiously for all of them lol

I love the BBC but seriously screw them for cancelling this, I mean how often do you get such a great show and then decide to flush it?!?

Thankyou Netflix!! The Greatest series I have seen in a very long time. Keep up the great work Netflix!!!

Just binged on season 3. Sure hope there is a season 4. Love the show.

Thoroughly enjoyed all 3 seasons so far. Been reading some of the Cornwell books also. As far as being better than GoT, its an apples and oranges situation. One is really close to the truth with some creative license, of course. The other is an out right Fairy Tale. Love both shows and would love "The Last Kingdom" to continue. Thank you Netflix...

Much better than Vikings which has terrible acting. In fact on par with GOT and better in some ways.

Just finished watching series 3 of the last kingdom absolutely brilliant
Hope we don’t have to wait too long for series 4
Thank you Netflix.

I agree!!!! Hoping for more episodes!!

The BBC has really lost the plot. The Last Kingdom is fantastic, and as a bonus it's one series in which Netflix can't promote smoking.

This is such a well done great show that I have watched all 3 series 3 times. Never get tired or enough of it! Thankyou Netflix for picking it up. I so hope you make more! Bless you!

I finished two seasons in about 30 hours. The best show on netflix.

I love this show. Hoping for many more seasons.

I absolutely love this show, one of the best I've seen. Easily can become apart of many's top favorite tv shows. Just finished season 3, and truly hope to see another season, or several!

I like this show a lot, Best Show. Cheers Netflix :D

I just finished the 3rd season. Best show ever. Thanks Netflix. When can we expect the 4th season ? Planning to watch the season over again.

Just the best series I've watched on Netflix. Brilliantly acted and educational as there is much factual content.

Absolutely loved Series 3 of The Last Kingdom. Such a strong cast and story. Looking forward to Series 4!

Keeping my fingers crossed that Netflix can give us at least another two seasons of this excellent historical drama.

As an American without personal ties to midevial UK history I can say without reservation that this is one of the best programs Netflix has claimed as an original in quite some time. I can only hope it continues because I just binge watched all 3 seasons in a matter of 4 days. The acting is superb and the story lines are enthralling to say the least. My best hope is, at the very least, a season 4..Destiny is All!!!

I've been waiting for the next series. Besides watching handsome Uhltred its given me more of an understanding of how England progressed through King Alfred. What a great King he must've been. Great show. Good on ya Netflix

Love this series keep it going

Keep it going this show is off the chain. Awesome actors. Plenty of action. Can't wait for more.

i think so.i dont like series.i only watched d last episode of got bec of my husband😀 but this one.captivating..looking forward i hope for the 4

Yep, definitely. Even more considering the trainwreck of the last season. What a waste of time.

I have just finished season 4 and hoping for a season 5. It started slow for me but thankfully I continued to watch.