After a rocky start, Star Trek: Discovery eventually picked up some reasonable critical responses for its first season. The cast came in for a lot of praise, along with the season-spanning plot complete with some clever (if unfortunately over-foreshadowed) twists. The show had a rougher ride from other Star Trek fans, however, for its apparently random redesign of aspects including the Klingon makeup and the design of the original Constitution-class USS Enterprise, which appears in the closing moments of the first season. 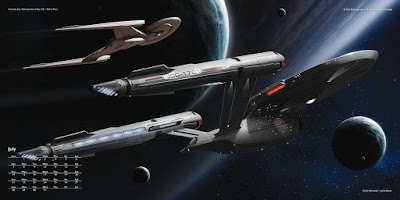 Designer John Eaves has confirmed that the Enterprise had to be partially redesigned for "legal reasons". When CBS split from Paramount in 2005, it created a bit of a quagmire for the Star Trek franchise. CBS inherited the rights to make new TV series (such as Discovery) whilst Paramount inherited the right to make new movies (such as the Abrams movies and the threatened Tarantino movie).

This legal situation proved confusing as to what company owned the rights to which models and designs. As a result, it was decided that the Enterprise needed to look "25% different" to the original version of the ship to ensure there was no legal problem.

Whether this applies to the surreal decision to radically redesign the Klingons remains to be answered, although it should be noted that Discovery did get away with keeping the designs for the Andorians and Vulcans almost identical to their original incarnations, and the Tellarites pretty close.

This analysis from TrekCore shows that the Discovery Enterprise has many callbacks to previous versions of the ship, including the original series version, the version seen in the first six movies and the differing versions seen in the original two pilots.

Filming on Season 2 of Discovery is now underway and the show is expected to return either at the very end of this year or (more likely) in early 2019.
Posted by Adam Whitehead at 18:59

I guess I just don't pay enough attention, but I didn't notice any significant differences that made me think "ooh, it's been redesigned!". I just thought it looked like a nice sleek update for modern times but essentially the same recognisable ship.