Neil Gaiman is working on a new adaptation of Mervyn Peake's Gormenghast novels for television. Fremantle Media, which produces Gaiman's American Gods for Starz, is set to produce the series and it is already meeting with possible showrunners and writers, as Gaiman's expanded role on American Gods Season 2 prevents him from taking a more direct hand in Gormenghast. 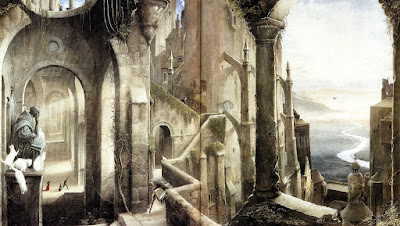 Also producing is Akiva Goldsman, who has worked as a writer and producer on Fringe and Star Trek: Discovery, but is best-known for writing the script for the movie A Beautiful Mind.

Mervyn Peake (1911-68) published two novels in the Gormenghast sequence whilst he was still alive: Titus Groan (1946) and Gormenghast (1950). The two books form a single story, recounting the birth and rise to adulthood of Titus Groan, heir to the vast, crumbling city-sized castle Gormenghast, whose inhabitants are mired in ritual and nostalgia. The kitchen boy Steerpike ruthlessly rises to power as well, orchestrating a web of murder, robberies and manipulations to gain fear and influence in the castle.

Peake wrote an additional short novel, Boy in Darkness (1956), although its relationship to the first two novels as ambiguous; he later confirmed that the book recounted a dark and sinister episode from the young Titus Groan's life. Peake started writing a third full novel in the series, exploring the strange, steampunk-esque world beyond Gormenghast Castle, but Parkinson's disease prevented him from making speedy progress. The book was published as Titus Alone in 1959, but Peake was unhappy with how the book was edited, with entire chapters cut. After Peake's death, the novel was restored to its original manuscript and reissued in 1970.

Peake planned as many as ten Gormenghast novels, sketching out later titles including Titus Awakes and Gormenghast Revisited, and had written some experimental early material for Titus Awakes before his death. His wife Maeve wrote an experimental continuation of the novel, which ended in surrealist fashion with Titus arriving on the real-life island of Sark. This was published in 2011 as Titus Awakes: The Lost Book of Gormenghast, although it had a muted reception.

In 1999 the BBC produced a mini-series based on the first two Gormenghast books, starring Jonathan Rhys-Meyers as Steerpike and (among others) Christopher Lee, Stephen Fry, Ian Richardson and Zoe Wanamaker. The TV series was well-received but budgetary and effects limitations meant that the true rambling strangeness of the castle could only be implied. There's also a board game based on the series.

Gormenghast is not an epic fantasy, instead a vast, rambling Gothic work of the imagination. However, it was influential on later fantasy authors: the huge, rambling castle is a clear influence on both the Hayholt of Tad Williams' Memory, Sorrow and Thorn and Harrenhal and Winterfell in George R.R. Martin's A Song of Ice and Fire.
Posted by Adam Whitehead at 17:43

I had the pleasure of translating the Gormenghast trilogy and it gave me the oportunity to delve deep into this astounding piece of fantasy literature. It is one of a kind book, in a class of its own and as such, demands a lot to be rightly transformed to the visual media. The important thing, in my opinion is that the castle itself is a character, and that must be taken into account. I am sure that Gaiman will try to do it justice and looking forward to seeing the series.

Yeah, with Akiva Goldsman involved, I'd write this project off as a loss. Considering what he did to Batman, The Dark Tower, Transformers, Winter's Tale, the works of Isaac Asimov...