Legendary Hero Movie Pictures Ltd. Inc. have confirmed they are developing a biopic of popular science fiction and fantasy author George R.R. Martin, the author of Fevre Dream and some other stuff. 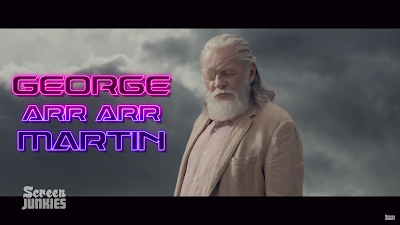 "We felt that George's life was an interesting story and it would suit a translation to the dramatic medium well," reported producer Brett Greenseeker, from the other end of a bottle. "It was a compelling idea, especially after I came up with it after five bottles of wine after being told to find a new project or find a new job," Brett continued, with audible sobs.

The initial script was a respectful and accurate account of George's involvement in comic fandom, which led to writing short fiction for editor Ben Bova and his first novel deal, before dealing with the pain of a underperforming career in the mid-1980s before moving into television.

"We then gave George the script for his comments and to fact-check things and he offered to write a new draft. The draft that came back had significantly more explosions in it," Brett confirms. "As well as casting notes saying he'd approve Tom Hardy playing him as a young man and absolutely no-one else."

The film will chart the full course of Martin's career, with him in later life played by Oscar-winner Anthony Hopkins. Hopkins has confirmed that the original script had a lot of him sitting in front of a computer screen for hours before sitting back with a slight smile as he brutally killed a fan-favourite character.

"George's new draft is much better. Did you know he wrote the Red Wedding on the back of a motorcycle whilst it was flying through a giant flaming hoop, pursued by the mafia? That's real commitment to the writing craft, which I respect," said Hopkins, speaking by mobile telephone from his accountant's house.

The film, set to be co-directed by Werner Herzog and Michael Bay, is due to go into production later this year, although Greenseeker acknowledged delays are possible. "We asked George for another draft and he said he was working on it. We asked for a delivery date and got this slightly amused guffaw in response. So it'll be ready when it's ready. Oh God, I need to find another job."

Nipples on a Breastplate: The Life and Times of George Radically Righteous Martin  is currently scheduled for release shortly after The Book of the New Sun movie.
Posted by Adam Whitehead at 13:24

Happy Easter and April Fool's Day to you as well. :-D

I applaud yet another reference to the Book of the New Sun film. Man I wish this existed, even if I don't know how they'd deal with Severian's unreliability.

April Fool's Day to you, too!