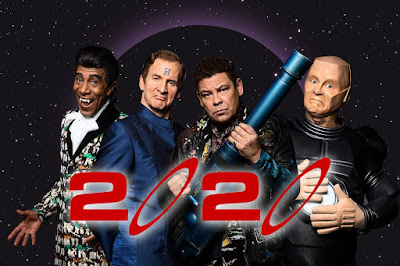 The series launched on BBC2 in the UK on 15 February 1988 and has run - somewhat intermittently - ever since. It has chalked up 12 seasons and 73 episodes in that time, a rather modest amount given its longevity, but fans have cited the show's slow rate of release as being helpful to its quality, with the writers and actors only reconvening when they feel they have some new stories to tell.

The premise of Red Dwarf is that the crew of the five-mile-long mining vessel Red Dwarf are wiped out by a lethal radiation leak. The sole survivors are Dave Lister, who had been sentenced to temporal stasis for smuggling an unquarantined cat onto the ship; the aforementioned cat, safely hiding in the cargo hold; and Holly, the ship's computer with an IQ of 6,000. Holly steers the ship out of the Solar system to avoid contamination and waits until the radiation clears...which takes three million years. Lister awakens to find himself probably the last human being alive. His companions are Holly, who has been driven slightly loopy through loneliness; a humanoid creature who is the last known survivor of a race which evolved from his cat; and a holographic recreation of Lister's pedantic and officious superior, Arnold Rimmer.

Over the course of the series, the premise remains constant but also evolves. Kryten, a service mechanoid, is rescued from a wrecked ship in Season 2 and joins the crew full-time in Season 3. In Season 7 the crew are joined by Kristine Kochanski, Lister's ex-girlfriend whom they rescue from a parallel universe (she disappears again by Season 9); whilst in Season 8 they temporarily resurrect the entire crew of the ship. The crew become more knowledgeable and skilled in space travel, but also make a number of powerful enemies, including genetically-engineered mutants and a race of killer androids.

The main reason for the show's longevity, aside from the charisma of the central cast, is that the show is a comedy which just happens to be set in an SF setting, rather than a comedy which takes the mickey out of science fiction (as all too many failed SF sitcoms do). In fact, the show has featured often cutting-edge SF ideas like nanobots, genetic engineering and black/white hole theory, sometimes taken fairly seriously (although often with amusing outcomes for the crew and the plot). The spin-off novels were particularly notable for being written just after the writers had absorbed A Brief History of Time, hence becoming the first SF novels to mix jokes about class warfare, curries and football alongside discussions of spaghettification and quantum singularities. The author of the latter, Stephen Hawking, was a huge fan of Red Dwarf.

Red Dwarf is due back on screens later this year with a 90-minute special which finally addresses arguably the show's biggest dangling plot thread, the fate of the rest of the humanoid cat species.

Here's to 32 years of adventures with the smegheads, and hopefully many more to come.
Posted by Adam Whitehead at 23:19

It's unfortunate that one of the key creative forces has not been involved since series 6, and later series barely feel like the same show.

The fan fiction does have some good jokes now and then, and even a couple of genuinely good episodes, and a lot of it's fun to watch if you're a Red Dwarf fan. [Even s7 has some good episodes - well, one good episode and two funny sequences in other episodes] But it doesn't really feel like the real thing.

Specifically, the original Red Dwarf combined SF ideas and comedy WITH realistic grounding, consistent characterisation and dramatic stakes. The stuff that's come since has occasionally gone into that territory ('Skipper'), but mostly it leans to much into the wacky.

I'll still watch whatever they come up with next, though.

Greatest Sci-Fi sit com in history - absolutely legendary show. Much to the credit of the authors, the books actually add solid background and flesh out the show's storylines.