The CEO of the Walt Disney Company, Bob Iger, has stepped down after fifteen years in the role. He will continue in the role of executive chairman until the end of 2021 as part of a transition period. 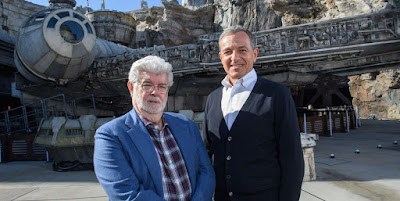 Iger, often described as the "most powerful man in Hollywood," became Disney CEO in 2005 and spearheaded the most startling expansion of the company in its history. Iger led the way in the acquisition of Pixar in 2006; Marvel in 2009; Lucasfilm in 2012; and 21st Century Fox in 2019. He also encouraged a renaissance in both Disney's parks division (which expanded significantly under his tenure) and also in Disney's own animation studio, the original core of the business.

These deals combined many of the most popular franchises in film and television history under the Disney banner. Iger was also instrumental in the success of the Marvel Cinematic Universe, granting MCU head producer Kevin Feige the power he needed to execute his vision as he saw fit with a minimum of interference from above.

Iger's period in charge of Disney has seen unprecedented financial and critical success, with very few stumbling blocks (apart from the somewhat variable performance of the Star Wars franchise in recent years, although it has remained broadly profitable). In particular, his leadership has been praised for steering the company through massive transitions in the home media market, the introduction of streaming and an increasingly uncertain future for film. He's also shown shrewd judgement in what brands and franchises fit the Disney banner and which do not; he famously turned down an opportunity to buy Twitter when he realised the platform's more negative aspects would be had to reconcile with the Disney brand. He recently led the way in launching Disney+, the company's new streaming service, which has already racked up 30 million subscribers (roughly a quarter of Netflix's numbers) in less than three months and with the service still to roll out in many overseas markets.

Iger will be succeeded by Bob Chapek, who currently runs the company's parks and products division.
Posted by Adam Whitehead at 12:47