Eli Roth and CHERNOBYL writer team up on BORDERLANDS film

Eli Roth, the director of films including Hostel, Cabin Fever and The House with a Clock in its Walls, is developing a film based on the Borderlands video game franchise from Gearbox Studios. Chernobyl writer Craig Mazin has written the latest draft of the script. 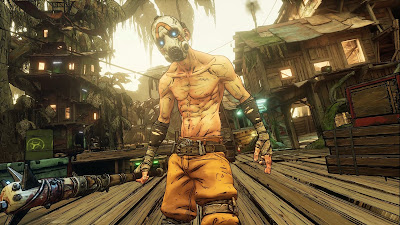 Borderlands is a science fiction first-person shooter series, noted for its offbeat humour and focus on co-operative team gameplay. The series so far consists of Borderlands (2009), Borderlands 2 (2012), Borderlands: The Pre-Sequel (2014), Tales from the Borderlands (2014-15) and Borderlands 3 (2019). The series has sold 58 million copies to date, making it one of the biggest-selling video game series of the last decade.

The news has come in the wake of a change of fortunes for video game adaptations. Previously seen as a doomed endeavour, several recent video game-to-movie adaptations have enjoyed greater success than any previous attempts, including Detective Pikachu and Sonic the Hedgehog, whilst the Castlevania TV series on Netflix has enjoyed significant success.

The current plan is to fast-track Borderlands to start shooting later this year for a possible late 2021/early 2022 release date.
Posted by Adam Whitehead at 16:25