Friday saw the inaugural David Gemmell Legend Award for fantasy being presented. The venue was the Magic Circle in London (minor fact: my great-grandfather worked for a time with Maskelyne & Devant, the two magicians who had a major formative role in the organisation) and there was a good turn-out (fantasy authors and particularly editors being vulnerable to the allure of free booze and canapes). Rumours that numbers were looking low until David Devereux promised to come along in a kilt, at which point they soared, cannot be substantiated at this time.

The event got underway with fantasy author (and friend of the late David Gemmell) James Barclay coming out on stage and booming out Druss' speech to the men before the battle at Dros Delnoch in Legend in an impressive and theatrical manner. Deborah J. Miller and Stan Nicholls were the main comperes for the evening and did a sterling job. Stan's wife came out to give an excellent tribute to David Gemmell, and then Mr. Barclay returned for the charity auction. Seeing people having to sit on their hands for fear of spending too much money was quite amusing, with the signed, mint-condition first edition of Legend (which went for £500) being the highlight of the evening. The featured charity, Médecins Sans Frontières, raised quite a lot of money on the night, which was great.

The awards were then announced, with each author getting a miniature replica of Druss' war axe, Snaga, as modelled here by Mr. J. Abercrombie. 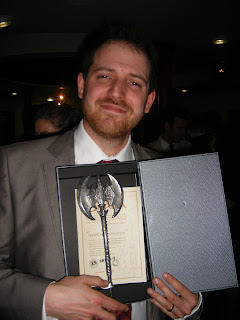 Joe was the only author in attendance, the other writers not being present due to the excuse of living on other landmasses (Australia, in Juliet Marillier's case).

The winning book was Blood of Elves by Andrzej Sapkowski, originally published in Poland in 1994 but with the English translation only being published last year. This is the first book in his five-volume series of novels featuring the character of Geralt, the Witcher (also the hero of a recent bestselling computer roleplaying game), following on from two earlier short story collections, The Last Wish and Sword of Destiny.

Sapkowski's win may seem a little left-field (the favourites were Abercrombie and Brent Weeks for his Night Angel trilogy), but makes sense. Although new in English translation, his books have been published in Europe for almost twenty years, and in places like Spain, Germany, Russia and of course Poland he is mentioned in the same breath as authors such as George R.R. Martin and Robert Jordan. I'd also wager that he is the biggest-selling author on the list by some margin, probably bigger than the others all put together. For a genre often completely dominated by discussions of English-language authors, seeing a European author win the first Gemmell Award was quite refreshing.

Joe took the news magnanimously, possibly because Sapkowski doesn't have a book coming out in English this year to compete with Best Served Cold at next year's awards :-)

Anyway, a good time was had by all and it was a great start to an even I suspect is going to get larger and more influential with each passing year. This year alone there were over ten thousand votes (or about fourteen times as many people who voted for the Hugo Awards last year).

"Left field?" I wasn't surprised a bit by it, since I had seen some relatively hard numbers on Sapkowski's Geralt books: A little north of 2 million sold in Poland, Russia, Czech Republic, Germany, Spain, and France. In Spain, he's sold a little over 100,000 copies of the Geralt books, which would place that number higher than just about all of the other finalists in either/both the US and UK regions, if I recall their print runs correctly.

Having read at least part of four of the five novelists (haven't yet read Marillier's), Sapkowski got my nom for the first round (didn't bother to vote in the final round) on the basis of his writing...and the knowledge of where the story is heading from BoE.

I wasn't surprised either, but certainly I've seen some people a bit bemused by it. Just another example that just because a book doesn't get much online discussion, it doesn't mean it's not hugely popular. Sapkowski also has a lot of time on his side here as well, with a fanbase almost as old as Gemmell's.

Considering that Abercrombie is at about 300,000 combined worldwide sales or slightly more now, your summary of the figures is on the nose. As I said, he's probably sold more than everyone else on the list put together.

As I said already some time ago, sales numbers cannot be the one and only deciding factor.

The question is if Blood of Elves and the witcher Geralt are really the best choice for the David Gemmell Award.

It is true that Geralt is a fine and outstanding anti-hero, a rather complex character. This is a similarity to David Gemmell's heroes.

Joe Abercrombies Heroes are not Gemmell style heroes either, but he is still closest to Gemmell IMO.

Gemmell would have loved Best Served Cold. And his previous trilogy, too. I am sure about it. :)

I think the "lack of discussion" comes from a few sources: a) Much of it in English takes place on the Witcher forums, b) the Saga is complete for Polish, Russian, and Czech speakers, with only a single volume remaining for the Spanish speakers, and c) A lot of the discussion likely is taking place in Polish, Russian, Czech, German, Spanish, and French instead of English at the moment, as the novel series proper was only just released.

As for the "spirit of Gemmell" bit, depends on personal tastes, I suppose. And if one wanted to have an author who went from "heroic fantasy" to historical novels with a few fantasy elements in them, then Sapkowski with his Hussite Wars trilogy would fit that bill as well :P

And for any wondering about the numbers I cited, I got them from a Spanish blog, Noticias ciencia-ficción.