Publisher's Weekly has posted the first review of Terry Goodkind's new novel The Law of Nines. After Goodkind completed his long-running epic fantasy series, The Sword of Truth, in 2007 with Confessor, he announced that he was moving on from fantasy to write mainstream novels which would continue to explore his 'important human themes' with stories set in the real world. He blew out Tor Books, his long- suffering standing publishers to join forces with a mainstream publisher for a large sum of money. 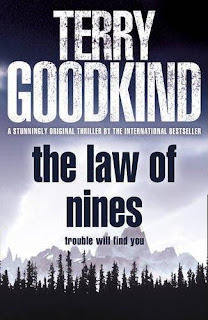 Their definition of 'stunningly original' seems unusually elastic.
At some point the mainstream idea seems to have gone out the window, though, as the review informs us that:

Bestseller Goodkind (Confessor) ventures into thriller territory with results sure to please fans of his fantasy fiction. In the opening pages, Alex Rahl, the book’s unwitting hero, saves the beautiful Jax from being run down on the street in Orden, Neb., by a plumbing truck flying a pirate flag. Jax, who turns out to be from an alternate reality where evildoers are attempting to seize control of her civilization, has traveled to Nebraska to seek Alex’s help in saving her people. In Jax’s world, magic takes the place of technology, but on earth she’s stripped of her powers and forced to fight armed with only her trusty dagger. The author takes his time setting all this up, but once the story gets rolling, it’s a gripping ride as the bad guys whoosh in between their world, which remains unseen, and ours. Fantasy and thriller readers alike will find themselves swept along to the final confrontation and looking forward to the next installment.

Yup, it's a sequel to The Sword of Truth set many centuries/millennia later in the real world (where the bad guys of that series were banished at the end of Confessor). Who'd have thought it?

The Law of Nines is published in both the UK and USA in September 2009. And be warned: "Trouble will find you".
Posted by Adam Whitehead at 16:25

Email ThisBlogThis!Share to TwitterShare to FacebookShare to Pinterest
Labels: terry goodkind, the law of nines

This is completely ridiculous...

Goodkind is lucky to still have a worthy name and readers... but then, I really don't understand why...

Is that plot summary a joke? Or is that really what the book is about?

The sad thing is, I'll proabably read it just for the comedy value.

Is it a sequel, though? Or just completely unoriginal?

I already regret finishing SoT - but I might try to find a free copy of this when it comes out, for lulz.

Well it sounds like a sequel. The Imperial Order guys came through and 'founded' our world, and I'm guessing that it's all kicked off again back in Rahlworld.

If it isn't a sequel, then it's merely a sign that Goodkind has gone Full Retard in writing this one.

If it isn't a sequel, then it's merely a sign that Goodkind has gone Full Retard in writing this one.

But you should NEVER go full retard !!!

Oh alright, I see what you were saying now. That makes more sense.

The thing that gets me about Goodkind is that for all his talk about the nobility of the human race, he passed up on the chance for a revolution in the Imperial Order army (there were only a handful from the army to join the good guys), passed up on the chance to bring the wildfire revolution in the Old World into the ending, and the only solution in the end was to transport the Axis of Evil into an alternate universe, along with all of Richard's inconvenient family members who so nobly wanted to live in a world with millions of murdering madmen.

No-one said Goodkind had to make sense. He just has to repeat it until you vomit.

Well, I suggest not reading this book - not even for the comedy value. I mean, he already did that for too long in the Sword of Truth series... preaching his values over and over.

@ Terez: No, no. Didn't you read the cover? This is a stunningly original novel.

Goodkind's philosophy was a bit fuzzy. It was something like that evil is innate to those who chose not to live their lives ('death-choosers') and thus could never be redeemed or swap sides, unless they were hot chicks, in which case they could. It wasn't well-defined.

It's 'stunningly' something and no mistake.

Seriously. It's probably a sequel of sorts with the Imperial Order in our world (that just makes sense given the naming), because otherwise - the man's Fantasy Name Generator must have broke if he's recycling already.

(courtesy of Foreverlad on Westeros.org)

Photoshop is very unforgiving in these matters.

After seeing that photoshopped image, why do I have this urge to say, "Kneel before Zod!"? :(

Good to know that we are evolved from rapists and murderers...

This is extremely funny. You've made my day.

Oh this really really makes me want to read this book! Will I laugh?

Guys, due respect, but it was hard not to roll my eyes a bit reading this thread...you all think this guy is so awful and such a joke, and yet it sounds like you all read the entire Sword of Truth series, and you're gonna read this new one "as a joke" or "for a laugh" or whatever? C'mon...

Nope, as that would involve Feeding the Yeard.

Goodkind's books do definitely fall into the 'so bad they are good' category, but to get to the gems (banning fire, running naked into battle in the snow for camouflage, the evil chicken, the noble goat, being punished for mass murder by being shanghaied into a soccer team) you have to wade through an awful lot of sludge. That is why there are chapter-summary sites and similar resources which are much more useful.

To be honest no one knows what this book is about yet everyone is judging the book by its cover (or a one paragraph review).

I for one am looking forward to it. As for people reading the novel for "comedy value" - isn't there something better to do with your time?

"As for people reading the novel for "comedy value" - isn't there something better to do with your time?"

How can a good laugh be a waste of time?

I've always loved Terry Goodkind's work. I refuse to judge a book by its cover. I look forward to reading it. You hate Goodkind's morals and themes? Everyone trashing it before they read it need to gain some morals of their own. Try writing a book instead of trashing it. I have and it isn't easy. Keep up the good work Terry.
Judy

OK, I read it, and I have to say it wasn't terrible. Although, I think "stunningly original" is stretching the truth just a bit. It's not a sequel so much as a new story set, centuries later, in the same "universe." By the way, I hope you're up to date on your String Theory.

If you've read SoT, then you will be having Wizard's First Rule flashbacks the entire time. He doesn't get overly preachy with the philosophy, at least not compared with the last few SoT books, so at least there's that.

Overall, I'd have to say I enjoyed it. If you were still on relatively good terms with Goodkind after SoT, then you should enjoy it as well. There are plenty of references to the series, so you get that nice "I know more than you do" feeling in many places. Plenty of Fan Service. In the end, I'd recommend giving it a chance.

P.S.- I'll give you one guess as to what Jax's last name is.

"Now i understand that prophecy: 'someday,someone born not of this world will have to save it'."
"We'll have to work out te details later"

I'll read it! i just hope goodkind cuts down on the whole repeating everything 2 or 3 times per speech.