In Ne-Issan, the balance of power has shifted dangerously after the exposure of the Yama-Shita's treachery and the death of its ruling lord. The family has been brutally oppressed at the order of the Shogun, and the family burns for vengeance, most notably against those Mutes and Trackers responsible for destroying their project at the Heron Pool. 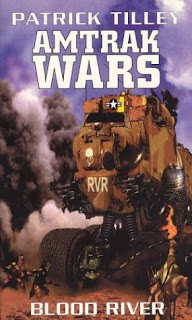 Meanwhile, these individuals - Steve, Cadillac, Clearwater, Jodi Kazan and Dave Kelso - are now fleeing for their lives out of Ne-Issan on Federation Skyriders, but a lack of fuel forces them down near the southern shores of Lake Michigan, still many hundreds of miles from the M'Call home turf in Wyoming. Their attempts to escape are challenged by a wily Mute wordsmith, an ambitious Ne-Issan foreign agent and the Federation, who have sent the Lady from Louisiana to 'aid' Steve's attempts to escape. Steve, still playing both sides against the middle, is still trying to keep a foot in both camps but Cadillac is about to make maintaining that pretence very difficult indeed...

Blood River is the most transitional of the Amtrak Wars books. It seems that every multi-book series needs a volume which doesn't have much of an internal plot but instead is taken up getting the characters to where they are needed for the next big story movement, and Blood River does that. It also does it quite well, with a real sense of urgency as our heroes are hounded by both the Federation and the Iron Masters and Brickman's Machiavellian plotting reaches new heights, but is challenged by Cadillac and Clearwater calling him on his bullshit and trying to get him to finally choose a side, culminating in the most shocking moment in the series to date. As I've said in previous reviews of the series, Clearwater has been a bit bland and not very well-drawn compared to the other principle characters in the series, but here she really steps up and shows in more detail a cunning and ruthless streak only previously hinted at.

Elsewhere, there are weaknesses. Steve and co. spend a lot of time dealing with simple problems of travel and survival which, whilst well-written, do take time away from the core storylines of the series. There are also a few dubious deus ex machina moments when our heroes get out of tight spots with hitherto-unrevealed Mute magic powers or other abilities, although this is not unprecedented in the series (or any fantasy series involving magic, really).

Blood River (***) is a solid and enjoyable continuation of the series with some weaknesses balanced out by Tilley's trademark relentless pace. The book is no longer in print but second-hand copies are available in the UK and USA.
Posted by Adam Whitehead at 12:58