Paul Ali, a young British writer with Muslim parents but who calls himself a secularist, has written and published a comic novel in the tradition of P.G. Wodehouse. The book attracted some minor attention and made him a very small amount of money. One passage, in which the protagonists joke about what would happen if the Prime Minister was assassinated, has attracted the attention of the Hostile Activities Research Ministry. After learning that Ali visited Saudi Arabia on holiday recently, HARM arrests Ali as a suspected terrorist and sets about finding the truth from him...by any means necessary. 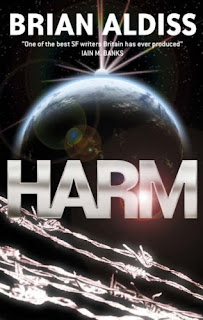 As Ali is interrogated, he escapes from the degradation and torture by constructing a fantasy world, Stygia, where in the distant future humans have sent a colonisation ship from Earth. The passengers were molecularly disassembled for transit, but their reconstitution did not go as planned and now the people are confused, or brain-damaged, or have problems with language. In this world Ali is Fremant, a bodyguard for the colony's deranged leader, Astaroth. As Astaroth prosecutes a genocidal war against the native inhabitants, the Dogovers, Fremant's loyalties are torn. There is upheaval in Stygia, war and revolution are coming, and what happens in the real world and in Ali's mind starts to reflect more and more on one another.

Brian Aldiss may be in his 80s now, but HARM (published in 2007) shows that his formidable powers as a writer have not diminished with age. In this novel Aldiss is clearly angry over what Britain and her allies did and became in the 'war on terror', but pulls himself back from a kneejerk polemical attack on the policies of the Bush-Blair axis. Instead he analyses the situation through the lens of SF, making the point that the brutal and oppressive measures that had been adopted were the result of fear and ignorance, an urgent need to distill complex issues down to a hopelessly naive black-and-white, us-and-them situation. At the same time, he also points out the reality of the threats that do exist and threaten us, and in the end offers no neat or pat answers because they simply do not exist. 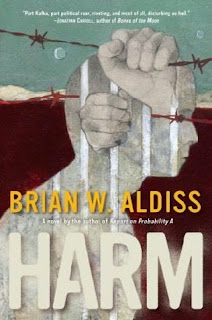 All of this may make HARM sound like a tiresome political treatise rather than as a novel, but nothing could be further from the truth. Aldiss' engagement with the issues does not detract from the story, which is a dizzying multi-stranded narrative occupying two different levels of reality and how the state of Ali's mind in the 'real' world impacts on that of Fremant on Stygia. Aldiss' formidable powers of SF worldbuilding are again on display here, with the hostile insects and fauna of Stygia recalling the grotesque genius of Hothouse, whilst descriptions of the journey through space from Earth echo elements in Non-Stop. But HARM is its own, dizzyingly intelligent book.

The novel concludes with both an author's note and a fascinating interview between the author and his publisher in which analyses his motives in writing the book and where it sits compared to some of his other novels.

HARM (****½) is firey, smart and compelling (I read the book in one sitting), urgent in tone and convincing in argument. It is available now in the UK and USA.
Posted by Adam Whitehead at 14:46