Steve Brickman and his reluctant ally Cadillac face a major problem. Clearwater has been taken captive aboard the Federation wagon-train Red River, and they need to find a way to break her and Steve's sister Roz out with only the warriors from Clan M'Call to help. But as they struggle with that issue, Mr. Snow faces the biggest challenge of his life. Enraged with the destruction of the Heron Pool and the loss of their assault force on Lake Michigan, the Yama-Shita have sent five warships to the trading post at Lake Superior for the annual exchange of goods and servants. Allied to the treacherous D'Troit Mutes, their orders are to destroy the M'Calls and their She-Kargo allies once and for all. The stage is set for the biggest military confrontation since the War of a Thousand Suns. 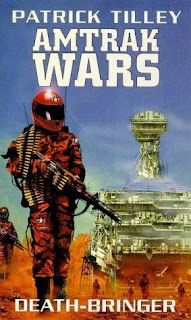 In my review of the previous book in the series, I noted that every epic fantasy series seems to have a 'scene-setting' book where the characters are just getting to where they need to be for the next slice of the action. It is also true that every series has a balls-to-the-wall, balloon-going-up volume where all the ant-hills are kicked over and all hell breaks loose (and many metaphors are mixed). Death-Bringer is that book. As with the previous volumes in the series, there is a lot of scheming, political intrigue, and truly impressive layers of deception as Steve continues his attempts to keep a foot in both the Tracker and Mute camps, involving some fancy foot-work. In fact, Steve and his intellectual nemesis, Karlstrom, may be the most impressive schemers I've encountered in a fantasy book with the possible exception of Littlefinger, Walder Frey and Tyrion Lannister.

Death-Bringer eases off the scheming to finally bring some widespread carnage to the table with two huge battle sequences. The Mute clans finally choose their sides and engage in a massive conflict on the south-western shores of Lake Superior, egged on by the Iron Masters, in this series' equivalent to the Battle of the Blackwater or the Pelennor Fields. Shortly afterwards, the M'Calls get to dish out some payback by launching a full-blown assault on Red River. Tilley proves to be an excellent writer of action sequences, fulfilling the promise shown in earlier novels, and there is some catharsis in all the plotting of the previous three volumes finally reaching a head. The ending is murky and definitely not neat - there's one more volume to go - but the sense of a climax to numerous complex and sometimes confusing plot threads is most welcome.

There are some weaknesses. As with the other books in the series, it's not high art and the layers of deception are so complex it's easy to get confused over who knows what and what people are supposed to know versus what the actual truth of the situation is, but then a lot of the characters express the same concerns. There's also a slight sense of contrivance at the end where the author needed to get one character into another location and the way he handled it was a bit artificial. Oh yeah, and the title is one of the corniest I've ever come across.

Death-Bringer (****) is one of the strongest books in the series, with a fine sense of pacing and action, with some truly excellent plot twists and revelations. As with the other books in the series, it is currently not in print, but second-hand editions should be available in the UK and USA.
Posted by Adam Whitehead at 21:33