In AD 2517, long after an ecologically-devastated Earth had to be abandoned, humanity has settled the 34 Tauri-2020 star system (colloquially known as 'The Verse'), consisting of five stars and numerous planets, moons, gas giants, brown dwarf protostars and their own attendant worlds. Well over 200 inhabitable bodies are located within this system, allowing the descendants of the refugees from the Solar system (led by the Americans and Chinese, whose cultures and languages amalgamated on the century-long trip from Earth) to spread across a vast area. Advanced technology has allowed the terraforming of even small moons into Earth-like worlds with tolerable atmospheres and gravity. However, this vast effort drained the resources of the central Core Worlds, leading to the expansion of the Sino-American Alliance to the border worlds. Feeling exploited and dominated by the Alliance, the outer worlds attempted to break away in a bitter conflict known as the Unification Wars. At the decisive Battle of Serenity Valley on Hera, the Alliance won and the independents were crushed. 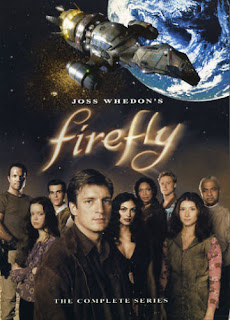 Years later, a veteran of the conflict, Malcolm Reynolds, finds himself the owner of a Firefly-class transport ship he has named Serenity in memory of the conflict. Fuelled by a strong dislike of the Alliance, he works both sides of the law in an attempt to keep his freedom and to keep flying. His crew include his second-in-command and war buddy Zoe, her husband and pilot Wash, hired muscle Jayne, engineer Kaylee and Inara, a Companion (effectively a courtesan) whose presence on the ship lends it a certain respectability. When a job goes wrong, Mal reluctantly takes on some passengers on Persephone, including a doctor named Simon and a Shepherd (preacher) named Book. But when it is discovered that Simon is on the run from the Alliance with his stowaway sister River, Mal's life and that of his crew gets a whole lot more complicated.

Firefly was the third television series to be created by Joss Whedon, who had previously developed Buffy the Vampire Slayer (1997-2003) and its spin-off, Angel (1999-2004). Whedon had expressed a desire to explore the genres of science fiction and Westerns, and had also become interested in the rise to global superpower status of China and how China's interactions with the USA would shape future generations. Whedon had also voiced his appreciation of the British science fiction series Blake's 7 (1978-81), which also featured a disparate group of characters living on the wrong side of the law on a spaceship, and several British SF magazines and critics picked up on some superficial similarities between the two shows (although they are very different in atmosphere and tone).

The result was a very interesting series, a hybrid of space opera and a Western with Whedon focusing on what he does best: the creation of a core cast of exceptionally well-defined, three-dimensional characters, often extremely flawed but nevertheless interesting with strong bonds between them. Considering Whedon had done this twice before, it remains remarkable that he was able, once again, to create nine regular characters, each of them fascinating in their own right, and then to match them with the perfect actors for the roles. In fact, Whedon was at the height of his powers of writing television at this point: whilst Buffy took a good season and a half to get really interesting and Angel was helped by inheriting some of its cast and production team from its parent show, Firefly is excellent right from the off, with none of the traditional growing pains that typically accompany new shows (and are especially notable in Whedon's latest project, Dollhouse).

"That sounds like science fiction."
"You live in a spaceship, dear."
"So?"
- Wash & Zoe, Objects in Space

The world that is depicted in Firefly is fascinating, with the space opera and Western elements coexisting alongside one another quite nicely. There was some precedent in this (most notably the Tatooine sections of the Star Wars movies), but Firefly took it to a whole new level, with Serenity at one point literally carrying a cargo of livestock to another planet. Extensive location filming in desert locations near Los Angeles used for Westerns back in the 1950s and 1960s helps further the atmosphere, and the unusual mix of high technology and the realities of survival on dangerous planets makes for something very interesting indeed. Some elements of the worldbuilding don't quite fall into place during the series itself - a lot of the information about the shape of the 'Verse and its many worlds only emerged long after the show was cancelled - but certainly they were still in the groundwork-laying stage when the show ended, with more to come later on. For example, although briefly mentioned, we never see the capital worlds of Sihnon or Londinium. This does follow Whedon's preferred method of making stuff up as he goes along and then codifying later on (as happened on both Buffy and Angel with their complex mythologies only coming into sharper focus towards their respective conclusions).

But that element is really secondary to the characters, and, as genius as some of the characters on his earlier shows are, with Firefly Whedon really knocks it out out of the park. Even Jayne, arguably the most straightforward character (described by Adam Baldwin as, "Sex, muscle, humour, thuggery: Jayne,"), has some fairly complex characterisation going on in several episodes. On the surface the characters have fairly obvious roles to play, with Kaylee as the heart of the ship/crew and Book as its conscience, but they are generally steered away from cliche and the obvious writing choices to go in a more interesting direction. The actors are uniformally brilliant, with Nathan Fillion deserving special praise for his role as Mal Reynolds, a hero who tries very hard not to be a hero but keeps getting dragged back into the role against his preferences. Summer Glau also has a very tough job as the damaged River but pulls it off with aplomb. 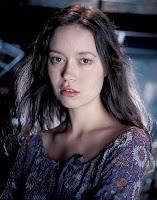 River Tam - she can kill you with her brain.
Another trademark Whedon tactic is to wrongfoot the audience with where they think the show is going. His shows are noted for these moments (such as Illyria's introduction in the final season of Angel or Angel's transformation in the second season of Buffy) and whilst Firefly didn't quite last long enough to do that in a major way, it still has some really impressive moments of tonal variation. Out of Gas, which tells three stories set in different timelines in just 45 minutes, is one such moment, whilst the final episode Objects in Space, which Whedon uses to explore various fairly complex philosophical ideas (seriously, watch this episode with the commentary on and Wikipedia on standby otherwise you will miss all the references), is even more of one.

Beyond these ideas, Firefly is also incredibly funny (at least one genuine laugh-out-loud moment is guaranteed per episode), endlessly quotable and visually impressive, with excellent visual effects from Zoic (who went on to use a lot of the lessons learned on this show on the new Battlestar Galactica) and some great action set-pieces. This was obviously an enormously expensive show to make, which contributed to its demise, but the money was clearly well-spent. Even seven years on, there are still some moments which leave you wondering how they managed to do that on just a TV budget. As well as the core cast there are also some excellent supporting turns, most notably Mark Sheppard (later Romo Lamkin on BSG) as Badger and Christina Hendricks as the redoubtable Saffron. There's also some fantastic set design, with the entire inhabitable space of the 200-foot-long Serenity realised on stage. Oh, and there's the music, not just the excellent title song written by Whedon, but some excellent incidental pieces mixing Western and Chinese instruments and of course the legendary ballad for Jayne, 'The Hero of Canton' ("This is what going mad feels like,").

When it comes to complaints, there aren't many (except for the fact it was cancelled, y'know, about seven years too early). Given the excellent attention paid to continuity elsewhere, Wash's sudden belligerence towards Mal and Zoe's war buddies relationship in War Stories comes out of nowhere and feels a bit out-of-character. Also, given the vastness of space, there's quite a few episodes that seem to rely on Serenity just 'accidentally' bumping into another ship, although I suppose that's a hazard of any space opera. Mal and his crew also get betrayed on a fairly ridiculous number of occasions (seriously, is it possible for two people in the 'Verse to agree to a deal and stick to it?), although towards the end of the run they do start noticing this and taking more sensible precautions. Erm, I'm struggling here. No, that's about it.

Firefly (*****) is just fourteen episodes long but accomplished more in those fourteen episodes than some shows have ever managed in two hundred. Thoroughly recommended. The show is available on DVD in the UK and USA right now, and also on Blu-Ray in the USA.

Though the show was cancelled, a sequel movie, Serenity, was made in 2005. I hope to review that in the next couple of days.
Posted by Adam Whitehead at 22:41

We have just added your latest post "The Wertzone: Wertzone Classics: Firefly" to our Directory of Science . You can check the inclusion of the post here . We are delighted to invite you to submit all your future posts to the directory and get a huge base of visitors to your website.

Wert, that's a pretty great summary and review of the series, nicely done.

Personally, I think the intro (details of The Verse) misrepresents the series, if only because it feels so non-Whedonesque and never had any real relevance in the series.

All the same, as a big fan of the show, you left me with some things to consider, especially the cons, which, looking back, are a bit more apparent now. Again, nicely done.