To the east of the great mountains lies the kingdom of the Dells, torn and divided with major lords rebelling against the king and the people still scarred by the activities of king's late father and his powerful advisor, Cansrel. Both are long dead, but Cansrel's daughter, named Fire for her hair, is still alive and a figure of hate and envy. In the Dells many creatures exist with special properties. Known as 'monsters', these creatures are identified by their unusual colours and strange abilities, many of them related to mental powers. Fire is the only human of this type alive, with the ability to affect people's minds and know their intentions. The temptation to abuse this power as her father did is something that Fire fights against, but when she is called upon by the king and his brother to use those abilities to defend the kingdom from its enemies, she has little choice but to obey.

Fire is the second novel from American author Kristin Cashore, following on from Graceling. Fire is set thirty-odd years earlier in the lands to the east of the kingdoms featured in that book, and can thus be read with no prior knowledge of the earlier work.

Like Graceling before it, Fire is a relatively 'light' work focused on the one central character of Fire and a number of supporting characters. The tone is different to the earlier novel, and there is more in the way of political intrigue and military action. It is a better book, mainly because the author has grown and is more confident in her writing, and also because the supporting cast is stronger and more interesting. The central character of Fire is well-drawn and psychologically complex with a number of conflicting desires and ideas which are explored in convincing detail. However, her reaction to several crises involves her bursting into tears and running to the stables to talk to her horse, which struck me as a bit winsome. Luckily, another element from Graceling that was slightly tiresome - the central romance - is present in less force in Fire and when it does intrude upon proceedings, it is much better-supported and adds to the portrait of an interesting central protagonist. Another element from the first book that a lot of people seemed to dislike - the names (which I didn't mind as they were very Vancian, which is always good) - is also much-reduced, although I did think that the character named 'Archer' perhaps should have just used his real name. A sequence in which Archer discussed having to track down another archer seemed unduly confusing even paying close attention to where the word was capitalised. 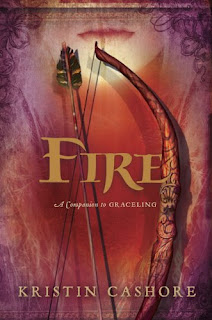 One of the biggest successes of the novel is in its portrait of Leck, a young boy with unusual powers who later grows up to be the main villain of Graceling. Here we see Leck in his youth and the author succeeds in making him utterly loathsome without over-using him. Definitely one of the most interesting fantasy villains to appear recently. Hopefully we will learn more about him in the forthcoming third book set in this world, Bitterblue.

Fire (***½) is an entertaining and breezy read. Those after a more meaty and violent fantasy experience may be disappointed, but as a lighter work this does the job quite nicely. It will be published in the UK by Gollancz on 17 September and in the USA by Dial on 5 October. The author's website is here.
Posted by Adam Whitehead at 16:58