LucasArts have, somewhat out of the blue, revealed that they are releasing a specially-remade version of their 1990 classic adventure game, The Secret of Monkey Island, this summer. This will coincide with the release of a new, five-part episodic game called Tales of Monkey Island, produced in conjunction with Telltale Games (producers of the recent Sam 'n' Max and Wallace & Gromit episodic games). 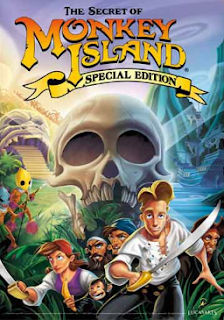 The Secret of Monkey Island is one of the most influential games of all time, combining a ton of humour and inventive visuals with fiendish puzzles and excellently-realised characters. For 1990's standards, it looked amazing and was a huge hit. Its 1993 sequel, Monkey Island 2: LeChuck's Revenge, was considerably larger, far funnier, with jaw-dropping graphics (for the time) and a far more epic story with an ending that people are still talking about today. I'd easily rank it as the best single adventure game ever made (and if they do a remake/re-release of MI2, which is probably dependent on sales of this one, I will be first in queue to pick it up). Series creator Ron Gilbert departed LucasArts after MI2 and the later Curse of Monkey Island and Escape from Monkey Island were comparatively disappointing, although not without merit.

The Monkey Island remake is interesting because, anticipating purist fans who hate the new art style, the team have enabled a mode to allow you to switch between the new, sharper HD graphics and console-based controls to the old-school pixels and cursor controls at will (no word if the PC version will allow the use of the mouse cursor with the new graphics, although it would be weird if it wouldn't). It looks very nice indeed, with the original soundtrack re-recorded and the new graphics looking solid without going way overboard (and they're not 3D, thank LeChuck).

Tales of Monkey Island I'm less crazy about. Telltale Games have a very variable track history, and the graphics look ropey and the trailer didn't make me laugh at all. Maybe it'll turn out okay, but for now I'll stick with the remake.

The Secret of Monkey Island: Special Edition will be released on PC and X-Box 360 in the summer, Tales of Monkey Island should launch on the PC and Wii in a few weeks.
Posted by Adam Whitehead at 01:08