AD 2989. Nine hundred and seventy-four years ago, the Old Time ended in the War of a Thousand Suns. The cities of the United States were seared from the face of the Earth in a nuclear holocaust unleashed by the evil 'Mutes', malformed immigrants whose only desire was to destroy all that was beautiful and good about this great country. Or at least, that's what the historical databanks of the super-computer COLUMBUS say, anyway. 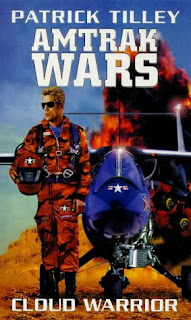 The Amtrak Federation: a network of underground cities and overland way-stations that grew out of a few bunkers where the top-ranking politicians and generals of the United States rode out a thermonuclear war. Forced to abandon the surface world due to radiation, the descendants of the survivors dug out a vast subterranean, high-tech civilisation where everyone knows their place and does their bit to help society survive, whilst the wise and just First Family rules over everything. Once radiation levels had dropped to a relatively safe level, the Federation emerged to retake the surface world. Unfortunately, they found that the Mutes had prospered and multiplied to truly frightening numbers in the intervening centuries. The Federation's response is to build enormous 600-foot-long wagon-trains and send them into Mute territory to begin the process of conquest and purification. With the Southern Mutes cowed, the Federation dispatches one of its most decorated trains, the Lady from Louisiana, and its air wing deep into the heart of the territory of the northern Mutes, or the Plainfolk as they call themselves. But the Plainfolk are a hardier breed with unusual weapons at their command, and in the epic Battle of the Now and Then River the clan M'Call drives off the Lady and takes one of its pilots captive.

For Steve Brickman, captivity amongst the Mutes is a terrifying prospect, but as he plots his escape he learns from his captors a radically different version of history and begins to question the very foundations of the society he was born into.

The Amtrak Wars is Welsh author Patrick Tilley's grand SF adventure series, originally published in six volumes throughout the 1980s. It is a cross-genre story, incorporating elements of post-apocalyptic SF fiction with the Western and epic fantasy (with North America standing in for a Middle-earth clone as the landscape) and, in later books, Shogun-style historical fiction as well. There is also a strong, often darkly comical subversive and satirical streak as well, with the Amtrak Federation itself coming over as a fascist state which employs some of the rhetoric and traditions of the 20th Century United States. Tilley himself spent a lot of time in the USA in the 1970s and 1980s and appears to be something of an Americanphile (not just in the Wars but also in his excellent 1976 disaster novel Fade-Out), but his use here of many of the traditions and 'feel' of the US government and military in the hands of an unelected dictatorship is effectively disturbing. However, I gather that American readers got the impression that Tilley was taking the mickey instead, perhaps accounting for its low sales in the USA compared to its much greater success in the UK, Canada and Australia.

In the first book, it is fair to say that Tilley is still getting a feel for the story. His previous novels had been an SF-tinged disaster scenario called Fade-Out and a rather bizarre story about Jesus turning up in modern New York (Mission), so Cloud Warrior represented a rather unusual new direction. The tone of the writing here is less formal than in his earlier novels, and it has to be said that the prose jumps around in its remoteness from the reader (at one point directly addressing the reader in a rather jarring fourth-wall-breaking moment). Some scenes take place in the limited third person perspective that is now traditional in epic fantasy, but most adopt an omnipresent viewpoint which feels curiously old-fashioned (and this is a book that's 26 years old) but not ineffective.

It's a tribute to Tilley's vivid and well-conceived (if somewhat barmy) story, characters and setting that the book overcomes these problems and roars along like a greyhound on crack. The traditional modern fantasy approach of the author spending two hundred pages just clearing their throat has no truck here as we are whizzed through the Amtrak Federation's air force training programme, introduced a dozen protagonists in both the Mute and Tracker camps and machine-gunned with inventive concepts and ideas (although luckily most are revisited later under somewhat more relaxed circumstances) in less than a hundred pages. The book hangs on its characters and one of The Amtrak Wars' trademark concepts is that half of those characters are tools whom you want to spend a fair amount of time beating the hell out of, most notably Steve 'All-American Hero' Brickman, whose arrogance and pig-headedness makes him a hero that's hard to like. However, he is also only 17 and the result of a disturbing indoctrinated upbringing, and as the book progresses and you see the scales falling from his eyes (a bit), the reader warms to him a bit more. Amongst the other characters, Steve's Mute antithesis Cadillac is well-drawn but is also a bit of a plank (the contrast between these two characters' developmental arcs over the course of the series is extremely well-handled), with the most fascinating character in the book being Mr. Snow, the Mutes' chief wordsmith and summoner who fulfils the traditional mentor role, although his approach of thinking his would-be students are total morons is refreshing (Mr. Snow is the missing link between Gandalf and Abercrombie's Bayaz). Other characters such as the inevitable romantic interest Clearwater are a bit one-note in this first volume, whilst later, more important characters like Jodi Kazan and Steve's sister Roz barely get more than a few lines. There is also an intriguing mention of a group called the 'iron masters' and a typical cliffhanger ending, setting up the inevitable sequel, First Family.

In Cloud Warrior (***½) Tilley sets up an interesting and somewhat original (in combination, if not in original conception) world and story with well-drawn and often ambiguous characters and some fresh takes on old concepts (Tilley's handling of the tired prophecy motif is particularly nicely done). The writing is a bit all over the place, though never less than readable, but settles down in the later, stronger volumes. The novel is not currently in print but second-hand copies appear to be readily available in the UK and USA.
Posted by Adam Whitehead at 21:26

I read this and the books that came after in fairly short order a long time ago. Enjoyed them a lot. Perhaps if I had read more in a similar area they would have appeared less original (the low tech culture swallowing and subverting a high tech interloper is certainly old (Shogun -> Avatar)) in fact as old as the phrase 'going native' - but the execution caught my imagination and I'm sorry the series stopped.