Last night Patrick Rothfuss was in London to sign copies of The Name of the Wind at Forbidden Planet. I headed down there, met up with Graeme and we got our copies of the book signed. We hit on the idea of doing some photos. Graeme went for the serious look: 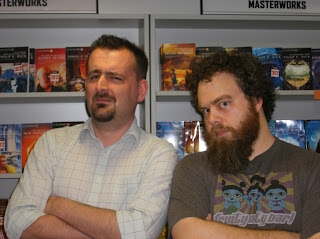 Not a publicity photograph for a new cop show coming this autumn. But maybe it should be?
Pat suggested that we do the 'funny' picture, which resulted in Traumatic Unexpected Blogger Molestation: 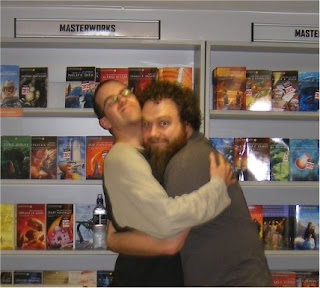 Not me being attacked by a young Brian Blessed.
That was an unforgettable experience. Anyway, post-signing we repaired to a nearby holstery where Pat held a Q&A and did some readings: a poem, one of his college humour columns (advice on relationships via the medium of monkeys) and a reading from The Wise Man's Fear, which was very good. Some interesting information came out of the signing - more Bast in Book 2 but not his full story, we meet some other races and cultures, and maybe only 8% of all the building Pat has done for the world will come out in the books - and Pat is a friendly guy who has a promising secondary career in stand-up if he gets bored of the whole novel thing. 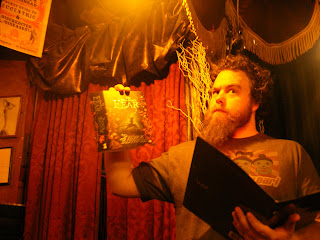 "You want this, don't you?"
Pat also expanded on the reasons for the delay to the book, citing structural issues and the complications that arise when you've had 13 years to work on a book and are then asked to turn the second book in within one year, and can it be better please? There was some interesting stuff there on the writing process as well.

All-in-all, a good time was had. Thanks to Pat for coming along and the Gollancz and Forbidden Planet crews for arranging everything!
Posted by Adam Whitehead at 10:08

I wonder if Pat's been told that he bears a striking resemblance to Gaiman's version of Abel...