I picked up this movie on DVD a while ago as it had good reviews and was very cheap (it's currently about £4 on Amazon.co.uk), but I'd never gotten round to watching it. When I heard that its director, Tom McCarthy, and one of its stars, Peter Dinklage, had been signed up for A Game of Thrones' pilot episode, it seemed like a good time to give it a go. 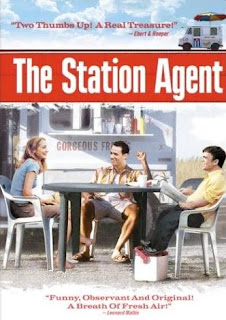 The plot is reasonably straightforward. Dinklage plays Fin, a young man suffering from dwarfism. Tired of having people comment on his height, Fin is a withdrawn man who seeks solace in his hobby of studying trains and his job working in a model train shop with his friend Henry. When Henry dies unexpectedly, Fin inherits a piece of property, an old train depot in Newfoundland, New Jersey, and moves in, hoping to continue his life of solitude.

Fin soon finds himself uncomfortably drawn into the lives of several other people. Joe is a garrulous, friendly guy running the local ice cream van on behalf of his father, who is ill. A local woman, Olivia, almost accidentally runs Fin over and in her attempts to make amends they form an interesting friendship. A somewhat less-developed storyline sees Fin attract the attention of Emily, the local young librarian, who is having her own problems.

The Station Agent is a curious movie, which for most of its length seems to be heading down the 'heartwarming relationship drama' route before the director suddenly veers away from the threat of cliche city into a new and more interesting direction. It's a short movie (only 90 minutes) but it has a laidback pace, focusing on the characters, dialogue and their slowly building relationships in a well-developed manner. As well as Dinklage in an outstanding role, Patricia Clarkson as Olivia and Bobby Cannavale give excellent performances as Patricia and Joe, the former playing a badly damaged character and the latter being that slightly overbearing, slightly too friendly type of person I think most people have met at some point in their lives. Michelle Williams has a much slighter role as Emily but makes the most of her scenes.

The late-stage shift in the narrative is an interesting move. Without giving away spoilers, the way that McCarthy avoids corny resolutions to the character arcs and deftly subverts expectations of a neat ending is well-done. He doesn't go bonkers and kill everyone or turn one of the characters into a psychopath, but he also doesn't go down the totally corny route either. It's a thought-provoking way of concluding the film that works well, although it took me a while to get into its headspace.

The Station Agent (****) is a quiet, funny, entertaining and occasionally emotionally intense movie that is well worth a watch. As a piece of character drama, it is a rousing success. The movie is available now on DVD in the UK and USA.
Posted by Adam Whitehead at 20:35

I managed to see The Station Agent at a little art house when it was released. It was a surprisingly good movie given the premise. The Director McCarthy also wrote and directed The Visitor which I've heard good things about as well.

I caught The Station Agent when it first came to video and I really enjoyed it as well. It could've easily taken a bad turn any number of times, but ended up being a consistantly entertaining film.