The Reef by Mark Charan Newton

When I read Nights of Villjamur a few weeks back, I noted that the book was being marketed as the author's debut. However, I had noticed Mark Newton's name on another book in my local Waterstones. Some research quickly revealed that Nights is actually the author's second novel. The first, The Reef, was published last year by small UK publisher Pendragon. Having enjoyed Nights, I decided to give it a whirl. 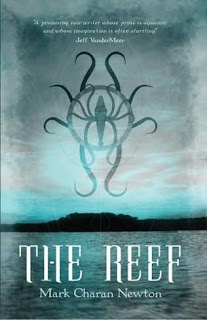 In the city of Escha, a scientist named Manolin is trapped in a difficult marriage with a demanding and paranoid wife. When his mentor and friend Santiago DeBrelt suggests an ocean trip to investigate distressing news from a scientist on the island of Arya, Manolin leaps at the chance and soon a disparate crew of researchers are on their way to the distant island. Meanwhile, in the city of Rhoam, a rumel woman named Jella is putting into operation a plan years in the making, a plan to avenge herself on Escha, the city which destroyed her life and that of her people. Her mission takes her and her companions to the coast, and to a ship bound for Arya...

The Reef is an intriguing novel. Although the events that unfold have potentially huge ramifications for the continent of Has-jahn and the rest of the world, it's largely a small-scale story focusing on the island of Arya and those who visit it. Whilst the novel is apparently about a mystery - who is behind a spate of murders on the island - it's actually much more of a character study, particularly looking at the dynamics of relationships and desire. The book succeeds admirably at both tasks, with the mystery unfolding satisfyingly and the book's comments on relationships interesting and thought-provoking. Manolin is a sympathetic but flawed protagonist, and his companions are also well-drawn, as are Jella's crew of terrorists (although I'd like to have learned more about the enigmatic and lethal Allocen). Whilst Newton's prose has improved since The Reef, it's still nicely different to a lot of fantasy books out there, with its poised manners and stylistic speech inflections reminiscent of Victorian fiction. The worldbuilding is also top-notch. As far as I can tell, The Reef is set on the same world as Nights of Villjamur (they share the non-human race of the rumel), but in a more distant location, maybe the other side of the world, since none of the locations in either book is mentioned in the other. The 'Dying Earth' feel Newton is looking for with this world of ancient, forgotten technology is again successfully achieved here.

The biggest drawback to the book is that the ending is somewhat abrupt. It feels like the plot is building to something quite big, and whilst the events of the end of the book are undeniably large in scale, they also feel a lot more perfunctory than they should. In particular, the meeting of the two sets of characters is brief and somewhat unsatisfying (although with a nice twist). That said, the final chapter is quite well-written and leaves the reader feeling somewhat uneasy.

The Reef (****) is a very solid and enjoyable fantasy which achieves the enviable task of not actually feeling like an overt fantasy despite the near-constant presence of nonhuman species and fantastical concepts. It is available now from Pendragon Press in the UK, but not as far as I can tell in the USA.
Posted by Adam Whitehead at 18:14

Looks like availability on this is very limited...only found 1 very high-priced copy on Amazon UK, none available through Abes, Book Depository or any other source that I checked.
Too bad, sound worth reading

... it's currently available in the following Waterstones' stores: http://www.waterstones.com/waterstonesweb/displayStockAvailability.do?sku=6112457

That's weird. I just double-checked Amazon and copies are freely available at £8.99, less than the cover price.