It was twenty-five years ago today that the first issue of the Transformers US Marvel comic, the first product to bear the TF logo, hit the shops. The cartoon series and toys wouldn't arrive for another four months. Originally billed as "#1 in a four-issue limited series", the comic lasted seven years and 80 monthly issues in the USA (and 332 weekly and fortnightly issues in the UK), eventually topping 100,000 sales a month in 1991 when it was inexplicably cancelled by Marvel Comics (possibly out of sheer embarrassment that it was starting to overtake some of their own signature characters). 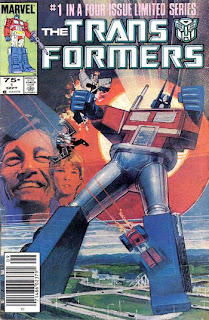 Not to scale.
Over the next twenty-five years the franchise would go through a lot changes and lean times, such as the early 1990s 'Generation 2' reboot which fell apart, then the revival of fortunes brought about by the arrival of Beast Wars in 1995 to the advent of the blockbuster Michael Bay movie in 2007. With the sequel to that movie due in just two months and a new animated series in its third, successful season, Transformers remains a popular series for children and also for adult fans (either wallowing unhealthily in childhood nostalgia or with an eye for a good story regardless of how superficially daft it is, take your pick :-) ). As mentioned in a previous post, Transformers was the first fictional, SF universe I got invested in as a kid and a lot of it surprisingly stands up well today, such as the quantum/time travel storylines that introduced me to the concepts of parallel universes, alternate timelines and temporal paradoxes long before I started reading Stephen Baxter. As promised/threatened in a previous blog post, look out for some more coverage of the franchise in the coming weeks. 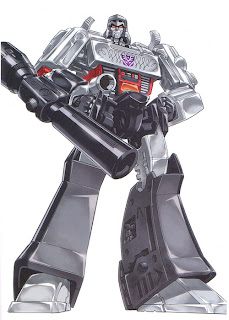 Megatron: still diabolical (but slightly incompetent) after a quarter-century.
Shortpacked! webcomic has a bit of a tribute to the franchise here. More information can be found on TFWiki. There's an interview with the early US comic writer/editor Bob Budiansky here.

Meanwhile, Megatron and Optimus Prime bask in the glow of post-movie success whilst their mid-80s robot competitors are faring less well.
Posted by Adam Whitehead at 15:38

I've read it before, but that's still a great interview with Budiansky.

25 years ago? Holy crap! Do you know how old that makes me?