In the year 2000, an academic named Pierce Ratcliff is putting together a fresh history of Ash, a 15th Century female mercenary captain whom mainstream history has largely ignored, but whose exploits have been of interest to a small number of historians. In preparing this new history, Radcliffe undertakes a fresh translation of the original historical texts. As he translates each chapter and sends it to his editor, they discuss the intriguing historical oddities within each chapter: references to the 'Green Christ', the 'Visigoth Empire' and 'Carthage', which of course had been destroyed many centuries before that time. But as the translations continue, very strange things start happening in the real world as well... 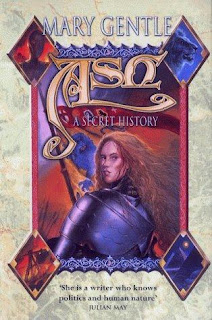 In 1476 the Lion Azure are one of the most famed and sought-after mercenary companies in Europe. Led by the female warrior Ash, they have become an elite force famed for getting out of tight spots and pulling off improbable victories. Contracted by the Holy Roman Empire to fight a war against Burgundy, Ash's leadership is threatened by a political attempt to marry her off to a high-ranking German nobleman, but this is put aside when a great threat arises: the armies of Carthage have swept into southern Europe in an invasion twenty years in the planning, crushing everything in their path.

Ash: A Secret History is an enormous book, both literally in its shelf-destroying size and in terms of its scope, which takes in two separate narratives unfolding in completely different styles and formats in two different time-periods. Ratcliff's story unfolds purely in reproduced emails between him, his editor and a couple of other correspondents, whilst Ash's story (allegedly the manuscript Ratcliff is translating) is in a more traditional prose style. As Ash's story unfolds, it starts off as an apparently purely historical account and then diverges from history as we know it. However, it cannot be dismissed merely as an alternate history, as Ratcliff and his editor share the reader's befuddlement as the differences between real history and the one described in the text become apparent, accompanied by some unusual archaeological discoveries in the present. This storytelling device is well-used throughout the book, and helps break up its gigantic length into much more manageable chunks.

Ash's story is very well-told. Rather than adopt an authentic-sounding 15th Century voice, Gentle instead tells the story if it had been translated into a modern style, complete with vast reams of modern swearing and the usage of modern military terminology. This seems to upset some readers, who find it jarring, but I found it enjoyable and it certainly adds to the readability of a complex and at times heavy-going novel. Whilst Gentle skimps on the language, the attitudes and mores of 15th Century Europe appear to be more authentic, with Ash having to prove her worthiness to every king, duke or general she meets. Gentle definitely doesn't hold back on the violence, though. Injuries are painfully described and Ash's childhood filled with abuse and pain is related matter-of-factly. Characterisation is strong throughout the novel, with Ash and her band of soldiers (Erikson could learn a bit from these books about how to distinguish soldiers from one another) and the various secondary characters very well-realised.

Mary Gentle handles all of these factors well, and manages to get across her story in convincing detail. This isn't strictly a historical novel, or an alternate history, or a fantasy, but it combines elements of all of these with hard science fiction to create something quite unusual. In fact, it's borderline genius, genre-bending and mixing elements in a manner that hasn't been pulled off so successfully before (John Grant tried to do something similar with his early 1990s duology of Albion and The World, but that was small-fry compared to Gentle's ambition here).

There are some issues which prevent me from giving this 'classic' status. It is too long. There are way too many staffing/strategy meetings with the characters sitting around talking about the plot rather than moving things on and this becomes especially notable in the last third of the novel. The first two sections moved quickly and with a good sense of pace, taking in dozens of different locations and characters. The latter third is mostly set in a single city under siege and the story becomes interminably dull at times, so much so that when the climax comes it's something of a surprise. I suspect some readers may feel sold a little short on the end of the 15th Century storyline, which is a bit perfunctory and obvious-in-hindsight. However, the 20th Century story, told in much less detail and with the reader only getting to know the characters through their emails and correspondence, is more interestingly done and its conclusion is very effective, a good example of how less can sometimes be more.

Ash: A Secret History (****½) is an immense, epic story of science, history, love, war and family spanning centuries and realities, but without losing its essentially human heart in the well-drawn characters. A superior work of speculative fiction, I'm surprised it's not mentioned more often in modern discussions of the genre. The book is available from Gollancz in the UK in its one-volume format, but in the USA is published in four volumes: A Secret History, Carthage Ascendant, The Wild Machines and Lost Burgundy. Gentle's later Ilario duology (The Lion's Eye and The Stone Golem) is set in the same universe.
Posted by Adam Whitehead at 13:32

This sounds really interesting. I don't think I can face something really long at this point, but I'll add it to my list of books to keep in mind for the future. Thanks for the review.

I've been planning to read Ash since all the hubbub from SFFWorld.com (I believe Hobbit is a HUGE fan); a friend lent me the book over a year ago, but it's still sitting on the shelf...looking as intimidating as ever :).

Ditto. I've owned a copy of the UK edition for a couple of years now but I just can't force myself to start it. The size is just so overwhelming.

Well, it's not really any longer than your average Peter F. Hamilton novel. And his bricks come in trilogies.

ASH is a similar length in terms of page volume to only THE NAKED GOD (which is insanely huge even by PFH standards), but ASH's font is notably smaller, so I suspect it's a good few thousand words longer.

Plus PFH's books are much easier to read. ASH was on the dense side.

I'm glad you liked it! I myself think it's is absolutely brilliant - and I loved the way that Gentle plays with both genre, history and myth in degrees of varying subtlety.

I wrote a very long, in-depth review on www.bscreviews.com, delving into some of the aspects of myth/history that non-professionals might overlook.

Oh! I've just stumbled across this post. I read ASH years ago, shortly after it was published and I have to say, it has stayed with me ever since. Fantastically written and just..WOW.

Maybe I should re-read it...

The first time this novel came to my atttention was in an interview Erikson did. If memory serves, it was one of five novels, fantasy or otherwise, that he recommended. I'm disappointed that the US version has been split into four parts. It'll make it more difficult for me to get a hold of the whole thing.

I bought the omnibus UK edition used - it was worth the convenience to have it in one volume. I really liked this novel. An example of really good military fantasy, blend of scifi & fantasy, and just that can't-put-it-down quality.