When I reposted the 'leaked' cover art a couple of months back, the result was a flurry of denunciations from the co-author, editor and publishers claiming it wasn't the final art and the real American cover art for The Gathering Storm would be far superior.

Well, not so much: 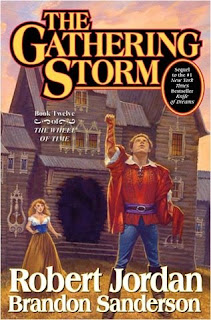 Rand rallies the troops for the Last Battle with a rousing rendition of Queen's 'We Will Rock You'.
And yes, that is the real one. It's on Dragonmount and it's on Brandon's blog. As you can see, they made sweeping changes to the cover art consisting of, erm, turning Rand around 180 degrees. He's still doing a weird jig, his legs are still bending in a manner not entirely human and there's still some random bar wench and a generic house is in the background (though less Addms Family-esque now). If this is the most exciting scene they could find to paint in the book, we should start worrying right now (although Book 11, which featured about five battle sequences, did have a picture of a strategy conference on the front cover, so who knows?). 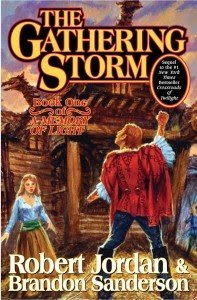 The working cover. Rand rallies the troops for the Last Battle by getting sozzled and busting some moves.
The book will be gracing US shelves at the start of November and will be released in the UK around the same time (or a few days earlier, if Amazon are to be believed).
Posted by Adam Whitehead at 21:37

Email ThisBlogThis!Share to TwitterShare to FacebookShare to Pinterest
Labels: a memory of light, brandon sanderson, the gathering storm, the wheel of time

Yeah it's the suckiest WOT cover to date. Even the incomplete cover was better, it at least had an eery atmosphere to it, while this feels like the cover to an easy going crappy western novel.

But who cares about the cover?? I just hope it doesn't hurt the sales to much. But like Tom said at the JordanCon, Sweet is now pretty old and have been ill, so maybe I can forgive him this bad cover.

Brandon didn't seem to fond of it though, well he didn't say anything negative about it, but he surely didn't praise it either.

The interesting thing though is what do the cover depict?? Someone clearly didn't like that house door, and Rand seems pretty mad about it LOL...

Seriously though something of importance happened in that house, my guess is that a forsaken (Semirhage maybee?) has killed someone close to Rand (Min?) and Sweet is badly trying to depict Rand grieving...

Or it could be something else, maybe Lews Terrin has taken temporary control of Rand and done some crazy shit, while Aviendah is trying to do something about it?

That is weird. I'm starting to think if this is actually a scene from KNIFE OF DREAMS and the house is the one Semirhage and the damane come out of. There were fireballs flying around with wild abandon and one of them could have blasted in the front door.

This may also be the case if TGS wasn't ready in time to show the artist, so they had to go with another scene.

Mind you, this series has had problems getting depictions of the right events in the right books before. There was the cover blurb for CoT which actually described the events of KoD.

I just died a little inside.

Ok I think I've got it nailed. Comparing both pictures, looks to me like its at the farm --- I'm looking at the dragons on the roof here, and remembering descriptions of the Mahel's place. Makes sense if you assume that Rand needs to clean out darkfriends/forsaken among the male channelers before the last battle.
The chick running is the either a bonded woman or that blond chick that will 'help him die'.
I guess we will find out in November.... anyone want to bet?

Blah! Good cover art formula = paint a good picture and put it on the cover of the book! C'mon now!

I think this style of WoT covers is hilarious. Have you seen the covers of book 2 and 4? It's crazy how people can draw with such seeming realism, and still not have the faintest idea of how human anatomy works.

Add me to the "even the incomplete cover was better" crowd...

... erm, never judge a book by its cover? Indeed, I hope the book is MUCH better than the cover. Which should not be too complicated.

At least the legs are straight this time. :)

It's worse than the mock-up that was leaked a few weeks ago. It really is unbelievably shit. There's just no redeeming qualities at all. Looks like Tor just don't give a toss. Sweet has really outdone himself here.

Haha, damn. That's one ugly cover. You have to wonder if they hired an actual artist or just told the coffee boy to do it on his break...

But seriously, Wheel of Time is a terrible series with a history of shoddy cover art that goes back to the very beginning, so this one being as terrible as the rest doesn't really come as a surprise.