Total War in Westeros and Middle-earth

One of the appeals of epic fantasy is the idea of vast sweeping armies assembling for battle and clashing in a well-described match of wits, strategy and cunning. It's a cornerstone of the genre for many readers, all the more interesting as if most of us found ourselves in a real medieval battle we'd run away screaming in terror.

Traditionally, the value of turning a book into a decent computer game for publishers has been pretty much zero. There were some great Middle-earth games in the past (the older among you may remember the interesting War of the Ring game from the late 1980s, or the legendary text adventure of The Hobbit), but it wasn't until the movies came out that some half-decent games were made, such as the Battle for Middle-earth duology (especially the second one), but none have even remotely captured the grandeur of the battles either described by J.R.R. Tolkien or envisaged on-screen by Peter Jackson in the movie trilogy.

That is now changing with the advent of 'user mods' or modifications. A lot of titles are now released with their creator tools intact, so users can create new material for the game. These range from new weapons or units to entirely new maps to entirely new games, using the original as a template of sorts. Due to copyright issues, these mods, if they are of existing franchises, must be released free of charge. For depicting strategy and battles in games, the default choice is Medieval II: Total War which, after an expansion and four patches, is now in a pretty decent state, and the various mods released for it have improved it further (if you want to get hold of the follow-up, Empire: Total War, I'd seriously wait for another six months until they actually finish the damn thing and re-release it properly). Naturally, epic fantasy fans have already been hard at work preparing some Total War versions of their favourite book titles.

Note that both of the following mods require both Medieval II: Total War and its expansion, Kingdoms (or the Medieval II: Gold Edition combining both titles), both patched up to their most recent version.

First up, and most obviously, is Middle-earth. The Third Age: Total War sees the player fighting for control of Middle-earth, playing as either Gondor, Rohan, Dale, Eriador, Harad, Isengard, Rhun, Mordor, the Silvan Elves, the High Elves, the Dwarves or the Orcs of the Misty Mountains. The Third Age is now available as a 'final' release with pretty much everything ready to go, although there will be further refinement of the game as new versions are released. But for now you can forge the Dwarf-Empire of the West that you have always dreamed of. Check here for more details. 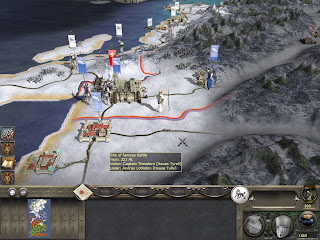 The Tullys take Lannisport whilst the Starks besiege Casterly Rock. The Lannisters are officially screwed.
Secondly, and in a much earlier stage of development, is Westeros: Total War, in which the player must battle for control of the Iron Throne of the Seven Kingdoms, playing as the Starks, Tullys, Lannisters, Greyjoys, Tyrells, Martells or the forces of Stannis, Renly or Joffrey Baratheon. Future versions will also try to incorporate the wildlings, the Night's Watch, the Others and the various factions of Essos (the eastern continent) such as the Free Cities, the Dothraki, Qartheen etc, but that's all a long way off. For now, it's just the War of the Five Kings. Westeros is going to be doing some very interesting things with the Medieval II game engine and will require much greater use of allies and diplomacy for the requisite backstabbing and signature treachery of the books (sadly, you can't replicate the Red Wedding). Some new and already-impressive AI routines in the mod already mean this is viable. Playing as the Starks and trying to relieve the siege of Riverrun, I noted that the Tully AI actually worked intelligently alongside me, forcing the Lannisters into battles where my forces were able to join in as well. Of course, Robb got killed five minutes later and the game ended with the Seven Kingdoms under the rule of King Roose Bolton, which I thought was brilliantly twisted, but maybe that was just me :-) 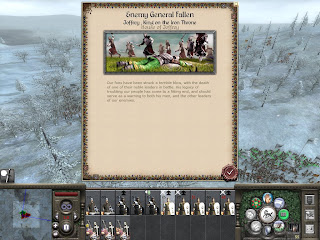 This is what is technically referred to as a "BOO-YAAR!" moment.
At the moment, only the Starks, Tullys and the King's Landing forces under King Joffrey are fully completed, but you can still play the other factions, they just have their original units (so the Greyjoys are using the Holy Roman Empire's troop roster from Medieval II). With a bit of imagination, this shouldn't be a problem. The map, the cities and some of the new gameplay innovations are also all complete. Hopefully we can get some more volunteers on board to complete the remaining factions and get the thing done in a reasonable timescale. Download information for the current build of the game is here.

Further information on both mods can be found through the respective links.
Posted by Adam Whitehead at 00:05