Orbit UK have released their cover for The Gathering Storm: 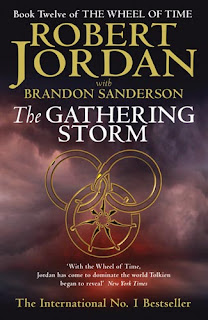 Nice. Probably the best Wheel of Time cover to date. Very much in the style of the UK editions of the last three hardcover books, but with the clouds taking on an ominous aspect in the background. Quite impressive, and likely to be better than the final version of the US cover (due any time now). 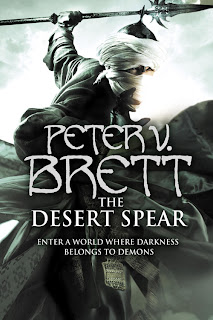 Elsewhere, Peter V. Brett has confirmed that his second book, The Desert Spear, has been delayed until April 2010 due to the writing delays he had on the book. However, this time around the book will be released simultaneously in the UK and USA.
Posted by Adam Whitehead at 17:56

Not a huge fan of the WoT cover. I love the snake/wheel in gold, but the clouds are lacking something. Yea, I get that its goes well with the title but still....

Also what the hell, three books instead of one....

The PETER BRETT cover looks fantastic, and while the WoT cover looks better than any previous that I have seen...still not a massive fan of it...

Both covers look good but I fear that the covers will actually be all thats' good about both books. WoT is beyond redemption if you ask me and what all the fuss is about with Brett is a mystery to me. I found the Painted Man to be very predictable and quite uneventful, even though I finished it quite quickly. They say, " never judge a book by its cover" but I guess that goes both ways. :)