Ysabel by Guy Gavriel Kay optioned as a movie.

Locus Online is reporting that Guy Gavriel Kay's 2007 novel Ysabel has been optioned as a movie. 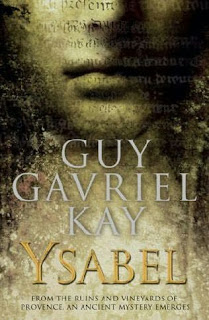 Ysabel is Kay's latest novel and won the World Fantasy Award, although other reviews have been mixed. Although Ysabel is the first Kay novel to be mostly set in the modern world, it is also a semi-sequel to one of his earlier books, and is set in the shared multiverse that all his books to date have been set in.

This is not the first Kay book to be optioned. The Lions of Al-Rassan has been stuck in development hell for the last decade, despite at one point having respected director Edward Zwick (Glory, The Last Samurai, Blood Diamond) attached to it. Ysabel, as a much smaller-scale story not featuring any major battles, should be easier to get on screen.

Thanks to Aidan for the heads-up!
Posted by Adam Whitehead at 01:45

I hope this happens I think this might have a much better chance of getting made than Lions, which might be Kay's best novel, although the problems with adapting Lions are somewhat obvious, such as the setting for one. I own all of his books and it'd be nice to see one done justice on the screen, but I won't hold my breath.

i hope this happens... i just started reading the book and so far its really good i would really love to watch the movie.....