Four men armed with machine guns hijack a New York City subway train, throwing the city into chaos. They threaten to kill a hostage every minute unless the city of New York pays them one million dollars. Lt. Zachary Garber (Walter Matthau), a New York City Transit Authority policeman, is bemused by the idea of anyone hijacking a subway train, since they can't take it anywhere the transit authority won't know about. He sets about investigating the crooks and their methods, whilst the city rushes to get the money to the hijackers before people start dying. 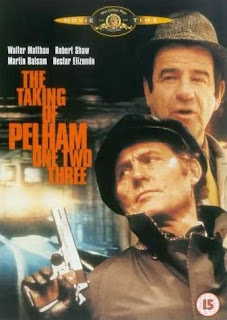 The Taking of Pelham One-Two-Three was released in 1974 and was a hit, its mix of New York cynical humour along with a strong thriller element proving to be a winning formula. Whilst based on the 1973 novel of the same name by John Godey, it alters some details of the story to make it more dramatic, most notably the memorable ending to the film.

Taking is a very effective movie, building tension throughout due to its use of audio exchanges between the transit authority and the hijackers, and the feeling that the hijackers are one step ahead of the police. There are some very influential ideas in this movie, notably the hijackers using colours as code-names (later borrowed by Quentin Tarantino for Reservoir Dogs), whilst there are some visual homages to the movie in Die Hard with a Vengeance. It's also nicely educational, with the audience learning probably more than it ever wanted to know about safety features on a subway network.

The heart of the movie, though, is the ongoing audio showdown between Walter Matthau's world-weary transit cop and Robert Shaw as the ruthless, calm, collected leader of the hijackers. The battle of wits between these two is superbly portrayed by two actors at the top of their game, and remains absolutely compelling. There are also some very accomplished supporting performances from the likes of Jerry Stiller, Martin Balsam and Julius Harris. The movie adds to what could have been a very straightforward story by including a subplot about the ill New York City mayor and how his hopes for re-election depend on how he handles the crisis.

All-in-all, The Taking of Pelham-One-Two-Three (*****) has barely aged a day and is a classic thriller, well worth tracking down. Two, frankly unnecessary, remakes also exist, a 1998 TV movie staring Edward James Olmos and a more recent 2009 movie starring Denzel Washington and John Travolta. The original is all you need. It is available now in the UK and USA.
Posted by Adam Whitehead at 21:28

Email ThisBlogThis!Share to TwitterShare to FacebookShare to Pinterest
Labels: the taking of pelham one-two-three, wertzone classics