The Colour of Magic by Terry Pratchett

Ankh-Morpork is the greatest city on the Discworld - a flat planet carried through space on the back of four elephants standing astride a giant turtle - and has seen fire, flood, famine and even the odd barbarian invasion during its long history, but even it is unprepared for the arrival of a much more devastating threat: tourism. Twoflower is the first visitor to the city from the distant Agatean Empire, and is happy wandering around taking 'pictures' of the 'sights' with his magic box and soaking up the 'authentic' atmosphere. This behaviour in Ankh-Morpork would normally result in him having the lifespan of a mayfly confronted by a supernova, but luckily the wizard Rincewind has kindly 'volunteered' to be his guide and protector in return for not having his extremities removed by the city's Patrician, who is anxious to avoid insulting a foreign power with an army in the millions. 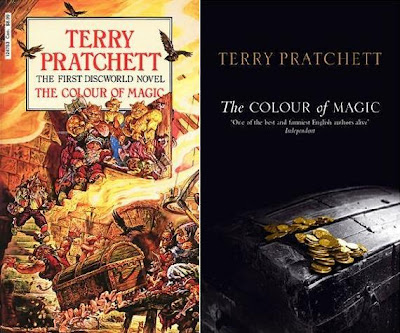 Unfortunately, Twoflower's attempts to introduce the concept of fire insurance to the hardy and creative business-owners of Ankh-Morpork results in an enforced flight from the burning metropolis and the beginning of a long and very strange journey across the Disc, taking in dragons, spaceships and the fabled temple of Bel-Shamharoth along the way. All the while the only spell that has ever managed to lodge itself in Rincewind's mind is very keen to get itself said, which could be a very bad idea indeed...

Published in 1983, The Colour of Magic was the fourth novel by Terry Pratchett. His debut book, The Carpet People (1971), had been a modest success, but The Dark Side of the Sun (1976) and Strata (1981) had both been remaindered and it looked possible that this might be Pratchett's last published novel unless it took off in a big way. It didn't look too original either, being a fantasy rewrite of Strata (which saw a spaceship from Earth discover a mysteriously flat planet and investigate it). Of course, it was a big success, buoyed by good reviews, and became an eventual bestseller. Pratchett wrote a direct sequel, The Light Fantastic, and then more books set in the same world with different casts of characters. As of this time of writing the Discworld series consists of thirty-six novels with the thirty-seventh due in a couple of months and Pratchett is the world's biggest-selling living fantasy author after J.K. Rowling and Stephen King. Not bad for such humble beginnings.

The Colour of Magic, as the first book in the series, of course shows the Discworld in a far more embryonic state than later books. The subtler, satirical streak that develops over the first half-dozen books or so is also missing. Instead, the novel is a much broader and somewhat more obvious pastiche of swords 'n' sorcery. The targets that Pratchett goes after are interesting as Rincewind and Twoflower encounter cultures and monsters that Lovecraft, Howard and Leiber would have found quite familiar. 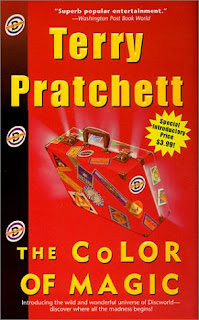 For all its distance from the later Discworld books, The Colour of Magic is still an entertaining and funny book. Pratchett's previous two novels had funny elements, but had broadly been trying to be more serious, 'proper' SF books. The Colour of Magic is clearly written with more confidence and in a more relaxed style. Even today it still raises a smile, possibly as some of Pratchett's targets have come back into vogue (the Cthulu-esque section resonates a bit more these days, especially), and taken on its own merits the book is solidly entertaining. Pratchett's characterisation still needs some work and his interpretations here of Death and the Patrician are notably different from the later books, but it was from this seed that the author began his ascent to becoming one of the dominating forces of modern fantasy, and it still holds up.

The Colour of Magic (***) is a bit old-school, but still amusing and entertaining, much faster-paced than his later work but at the same time lacking some of the subtlety and intelligence of other books in the series. It is available now in the UK and USA. Sky One broadcast a television adaption of the book and its sequel, The Light Fantastic, last year, which is now available on DVD in the UK and USA and on Blu-Ray in the UK.
Posted by Adam Whitehead at 17:31

Email ThisBlogThis!Share to TwitterShare to FacebookShare to Pinterest
Labels: discworld, terry pratchett, the colour of magic

I was wondering if terry's novels can be read like from anywhere in the series or are they continuing. I mean does one require a sequence of reading?

Terry's books have continued story arcs but they can be read from anywhere. I'd recommend reading the ones with the same characters in order, but other than that, you can start anywhere. I'd also recommend not starting at the beginning (or the end), but with one of the "stand-alone" books, such as the small gods, the truth, pyramids or such...