In 1965 the British government had a shadowy series of contacts with an advanced alien species known only as the '456' (four-five-six), named after the radio frequency they used. The results of that contact were classified, but involved twelve children being handed over to them for purposes unknown. Unbeknown to the government, one of those children escaped and has grown up haunted by his memories of that experience. 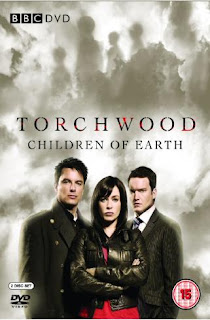 In 2010 all the children in the world simultaneously stop and announce, "We are coming." The governments of the world investigate, as do the members of Torchwood, an organisation based in Cardiff designed to investigate alien threats to Earth. However, when Torchwood comes close to exposing the secrets of forty-five years earlier, the government outlaws the group and tries to have them eliminated. Civil servant Mr. Frobisher is put on the front line by the Prime Minister as he has to negotiate with the aliens, who have indeed returned...

When Torchwood launched in 2006, it was billed as Doctor Who's more adult, darker cousin. Broadcast after 9pm on BBC-3, it was supposed to take the Whoniverse in a new and more interesting direction. Unfortunately, it appeared at the time that 'darker' and 'more adult' actually translated as 'some swearing' and 'everyone on the cast is gay (kind of)'. Season 1 of Torchwood is at times borderline unwatchable. Season 2 started moving in the right direction, with some better writing and some blatant-but-amusing fanservice (James 'Spike' Marsters from Buffy and Angel as another time agent who naturally cops off with Captain Jack), but it still wasn't fulfilling its mission statement.

With the third season, the BBC decided to try something different. With Doctor Who off the air for the year (four TV specials aside), they decided to not only promote Torchwood to primetime BBC-1 status, but to turn it into a five-hour mini-series airing across one week. With a level of serialisation unmatched by anything that Doctor Who has done since its return in 2005 and with producer Russell T. Davies able to exert more influence over the project (as his tenure on Who winds down and Steven Moffatt gears up to take over), it was hoped that the series would finally take off. Fans were sceptical, but intriguing trailers and a steady drip-feed of news items from the BBC convinced a lot of people to tune in and give the show the benefit of the doubt. 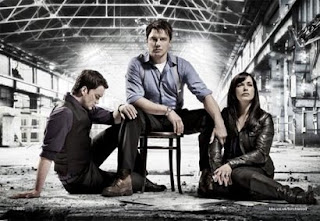 And, against all the odds, it worked. Torchwood: Children of the Earth, as it has been dubbed, has won more acclaim than anything else related to new Doctor Who since its return four years ago. It moves with a ferocious sense of purpose, more like 24 than anything else, and its long running time allows characters to be explored more thoroughly and the storyline to unfold more logically than in the regular 45-minute episodes. They also got in some experienced scriptwriters from shows like Spooks to help work on the structure and tone of the mini-series. It genuinely is now adult. Ianto and Jack's relationship is portrayed more naturally and in keeping with the story rather than for any sensationalist reasons. Mr Frobisher's arc is stunningly well-handled, with guest star Peter Capaldi (the angel Islington from Neverwhere, among many other fine roles) giving an astonishing and award-worthy performance above and beyond the call of duty.

The mini-series doesn't pull any punches. Whilst the conclusion to the story is a little contrived (featuring RTD's preferred resolution of characters talking technobabble and pounding intently on keyboards until some fancy CGI kicks in), it isn't without cost. This isn't a neat ending at all and leaves quite a few of the characters seriously mentally scarred for life. The tone is pretty bleak, with only a few rays of sunshine allowed to appear at the end.

It isn't all great. The music for new Who and Torchwood has always been jarringly out of place and too loud in the mix, and it's still the same in this series. There's also a lot of shots of the characters running around various corridors and streets which sometimes seem to have been dropped in to make up the running time, but this is actually much reduced from its normal prevalence in the regular episodes. The story also requires the British government (and many of the other world governments) to behave in a snivelling and cowardly manner which led me to ponder if the writers were trying to make some kind of political point. I like to think the human race is better than Children of Earth makes us out to be. But these problems are minor.

Torchwood: Children of Earth (****½) is a shockingly good piece of British SF, easily the best thing to come out of the new Doctor Who since its return in 2005 and maybe the best slice of British TV SF since 1998's Ultraviolet. It is fast-paced, genuinely adult, asks hard questions and doesn't skimp on the answers and features some brilliant writing and acting. Seriously, the new Star Trek movie and Watchmen don't stand a chance: this is what will win the Best Drama (Longform) at the Hugo Awards next year, unless the voters go stark-raving mad.

The series will also air on BBC America starting on 20 July.
Posted by Adam Whitehead at 23:05

Email ThisBlogThis!Share to TwitterShare to FacebookShare to Pinterest
Labels: children of earth, doctor who, torchwood

children of earth are star.

" Seriously, the new Star Trek movie and Watchmen don't stand a chance: this is what will win the Best Drama (Longform) at the Hugo Awards next year, unless the voters go stark-raving mad."

Well, I voted for in in nomination, at least. Not that many other people seem to have, as it didn't even make the shortlist. Instead there's dreck in lines with Star trek and Avatar.

Should one watch the earlier seasons of Torchwood before watching Torchwood: Children of Earth?

It's not really necessary. The only thing you need to know is that Torchwood is an organisation founded by Queen Victoria to deal with alien threats to the UK and her interests, that Captain Jack is a human from the far future who is immortal (for reasons too complicated to go into here), and that the Torchwood team (who have a variable relationship with the UK government) lost two of their team-members in a recent catastrophe. The actual story is self-contained in the mini-series.