More official casting news for A Game of Thrones

A lot of news about casting has broken over HBO's A Game of Thrones today, following from the earlier confirmation that Peter Dinklage will be playing Tyrion. So let's get down to it:

Sean Bean in the forthcoming Medieval movie Black Death
Sean Bean has been cast in the lead role of Eddard Stark, Lord of Winterfell and the North. Bean rose to notice playing supporting roles in the late 1980s, but hit the big time in 1992 by playing Sean Miller, the villain in the Harrison Ford movie Patriot Games. The following year he cultivated an image as a sex symbol by appearing as Mellors in a BBC adaptation of DH Lawrence's Lady Chatterley's Lover. His rise to stardom really began when he took over the role of Richard Sharpe from Paul McGann, who had broken his leg shortly after beginning the filming of Sharpe's Rifles. Based on the Bernard Cornwell Sharpe series of novels, Bean went on to play the role in a further thirteen two-hour TV movies between 1993 and 1997, taking Sharpe from the initial British intervention in the Peninsular War to Waterloo. He maintained his Hollywood villain credentials during this time by also appearing as the treacherous Agent 006 in the James Bond movie GoldenEye.

His identifiability as Sharpe led to casting offers drying up, and he didn't work for nearly a year after completing Sharpe's Waterloo, although he returned to the big screen in Ronin and didn't look back. His biggest genre role to date came when he played Boromir in Peter Jackson's adaptation of The Fellowship of the Ring in 2001. He also appeared in a specially-filmed flashback sequence for The Two Towers which was cut, but restored for the DVD special edition of the movie, along with another brief appearance as a hallucination in The Return of the King. He also played Errol in Equilibrium and had a very good role as Odysseus in Troy, an appearance notable for being one in which he didn't either 1) die, or 2) played a villain, or 3) both. More recently he played a villainous serial killer in a very bad remake of The Hitcher and resumed the role of Sharpe for two more TV movies. 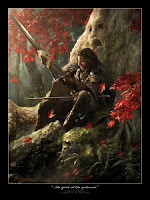 Lord Eddard Stark in the godswood of Winterfell
Eddard 'Ned' Stark is arguably the lead character in the novel of A Game of Thrones. He is the Lord of Winterfell and the North, ruling over a vast but lightly-populated area. He is a close friend of King Robert Baratheon, whom he helped win his crown. As a second son, Ned did not expect to inherit the rule of the North, but when the Mad King, Aerys II, murdered his father and elder brother and approved the kidnap of his sister, Ned inherited the title and raised the banners of rebellion. Ned Stark also helped Robert crush the rebellion against his rule led by the Greyjoys, the ruling family of the Iron Islands. Stark is known for his honour, his trustworthiness, his steadfastness and reliability. He has little interest in politics, and is fiercely loyal to his family: his wife Catelyn, sons Robb, Bran and Rickon, and daughters Sansa and Arya. He also has a bastard son, Jon Snow, whose presence in Winterfell causes a constant strain on his marriage. The action of A Game of Thrones begins when Ned is summoned to King's Landing to serve as the King's Hand (a role analogous to a prime minister, overseeing the day-to-day rule of the kingdom) after the death of the previous incumbent. 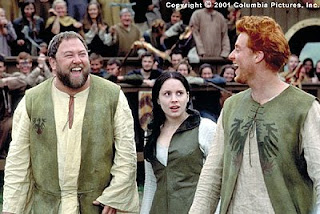 Mark Addy has been cast as King Robert Baratheon. Addy rose to fame as Dave in The Full Monty (1997) and had a number of roles, usually comedic, in films such as A Knight's Tale as well as sitcoms such as The Thin Blue Line and Still Standing. He has played more serious roles in Jack Frost, Band of Gold and, most recently, Red Riding. There is an interesting interview with him in Robert Baratheon lookalike mode, about his opera Fram, here.

Robert Baratheon was, in his youth, a mighty warrior who was never happier than when he was fighting, training or partying. He became Lord of Storm's End at a young age (when his parents died in a shipwreck) and was given the responsibility of bringing up his infant brother Renly (although he mostly deferred this to the castle staff). Robert was immensely charasmatic and was known for winning supporters to his cause just through talking to them. As a child, he fostered for a time at the Eyrie, the great mountain castle belonging to Lord Jon Arryn, and there met and befriended Ned Stark, who was also fostering there for a time (a tradition by which children from one noble house would stay with another for a time to strengthen relations between them). The great friendship between them grew when Robert fell in love with and was betrothed to Ned's sister, Lyanna. When Lyanna was kidnapped by Prince Rhaegar Targaryen, the son of the Mad King Aerys, Robert was furious. When Aerys murdered Eddard's father and brother (as well as Jon Arryn's nephew and heir), Robert raised the standard of rebellion alongside both the Arryns and Starks, and helped win the powerful Tully family to their cause as well. Through a blood relation (his grandmother was a Targaryen), Robert claimed the Iron Throne and led the rebellion, winning the great victory at the Battle of the Trident and killing Rhaegar. Unfortunately, Lyanna had died by this time and after winning his crown Robert chose to marry Cersei Lannister, after the Lannisters unexpectedly defected to his cause during the war and captured the capital city in his name.

King Robert and his wife, Cersei of House Lannister
By the time A Game of Thrones starts Robert has become fat and unhappy with the tedium of ruling the kingdom. His marriage is not a happy one and his three children (Joffrey, Myrcella and Tommen) are distant from him. He has few true friends at court, only people who want things from him. When his Hand, Jon Arryn, dies, he immediately chooses Ned Stark to replace him. 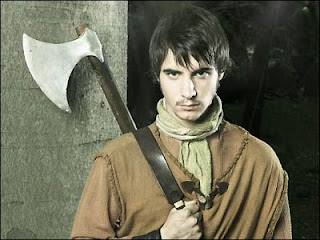 Viserys is the son and legal heir of King Aerys, whom Robert Baratheon supplanted as King of Westeros. Viserys and his young sister Daenerys fled to the continent of Essos and were given sanctuary by a powerful merchant lord. As the series opens Viserys has arranged to sell his teenage sister in marriage to Khal Drogo, the leader of an immense army of Dothraki blood-riders, in return for his help in invading Westeros and reclaiming his crown.

Viserys Targaryen, the Beggar King
Jack Gleeson is a young actor whose only major role to date has been in Batman Begins (as 'Young Boy'). He will be playing Joffrey Baratheon, Robert's eldest son and heir. To strengthen the alliance between the Starks and Baratheons, Eddard agrees that his daughter Sansa should marry Joffrey. Joffrey is vain, arrogant and entirely lacking in martial ability, but likes to boast of his elite swordfighting skills. He is usually accompanied by his bodyguard, the scarred and threatening Sandor Clegane (uncast as yet). 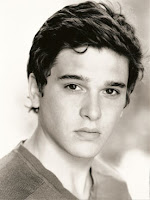 Kit Harington
Newcomer Kit Harington has done some theatre work but nothing on television yet. The producers were apparently blown away by his audition tape. Harrington will be playing the key role of Jon Snow, Eddard Stark's bastard son who finds his place at Winterfell increasingly uncomfortable due to the attitude of his step-mother and eventually decides to 'take the black' and join the sworn brotherhood of the Night's Watch. The Watch guards the Wall, a colossal fortification of ice stretching for 300 miles across Westeros' northern border built thousands of years ago to defend against an ancient threat. That threat has long since vanished (cough) but the Watch still has to guard against the wildlings or 'free folk' who live beyond and occasionally seek to cross the Wall and raid the lands beyond. 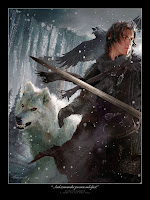 Jon Snow and his direwolf, Ghost

For my money, these are solid casting choices. Sean Bean is a good choice for the solid and reliable Ned. Mark Addy is a bit more unexpected as Robert, but his casting tape impressed quite a few people (including GRRM), as per Parris' comments in this thread. As for the others, Lloyd is a strong up-and-comer with some solid work behind him. Harrington and Gleeson are more or less total newcomers, although Benioff and Weiss were impressed by the former's audition, which apparently stood out from the rest by some distance.

The only concern I have at this time is that unless Gleeson is a lot older than he appears, Joffrey would seem to be quite a few years younger than Robb or Jon, who in the books are only a year or two older than him. If there are many years between them, this makes the key scene from Book 1 where Robb and Joffrey try to arrange a practice bout somewhat nonsensical. Hopefully that point will be clarified as more news emerges.

As always, well written and researched, Wert. You capture pretty much all of my thoughts on the casting so far.

I don't think the age-differences are that important, and that scene is probably not that either. Joffreys character could be shown in another way if that is the case

Ah you've answered some questions I had over at Spec Horizons.

I reckon Mark Addy might surprise a few people and bring a real gravitas to Robert and not make him just a complete bumbling idiot.

It's actually starting to sound exciting!

Great write-up Adam. Really like how you summarize both the actors' careers and the background of the characters they play.

Just one thing, Kit Harington's name is mispelled. There is only one R in his last name.

Marko actually corrected me on this in my blog post as well, it seems that Kit Harington's name was spelled wrong by THR and subsequently the incorrect spelling is spreading.

Again, great job on the actor and character summaries.

Is Jack Gleeson the son of Brendan Gleeson?

I am so looking forward to seeing The Game of Thrones on HBO! I love the books, and hopefully, ADWD will be released soon!