There was an eighth son of an eighth son who was, naturally, a wizard. But, for reasons too complicated to get into now, he also had seven sons. And then another one: a source of magic, a sourcerer. The Discworld hasn't seen a sourcerer for thousands of years, since the Mage Wars almost destroyed the world and caused an awful racket which annoyed the gods. Soon enough the re-energised wizards of the Disc are engaged in all-out warfare and the Apocralypse draws nigh (provided the Four Horsemen can get out of the pub in time). It falls to a wizard who doesn't know any spells, a box with lots of little legs, a mighty barbarian warrior of three days' experience, a timeshare genie and a homicidal hairdresser to save the day. 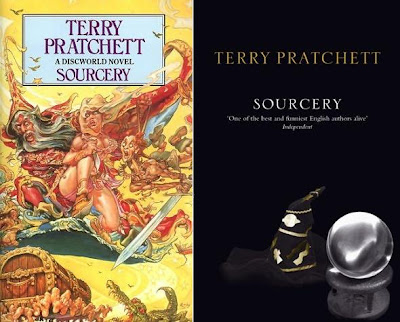 Sourcery sees the return of Rincewind and the Luggage as the Disc faces its greatest threat so far. Whilst previous books seemed to have end-of-the-world plots tacked on, this one embraces the concept to the fullest and is probably as 'epic' as the series ever gets. Fortunately, Pratchett seemed to get the end-of-the-world-is-nigh story out of his system with this book and whilst dire consequences would still abound in later books, things would never quite get as huge as this again.

Still, Pratchett has fun with the concept. Deep in the heart of every fantasy author is the burning desire to unleash a story with magical duels, vast magical towers exploding, evil grand viziers twirling their moustaches and unreconstructed, mighty-thewed barbarian warriors smiting legions of disposable extras with a broadsword so huge that it had to be forged from a gantry. There's some nice typically Pratchett twists on the concept though, and the humour is well-constructed throughout, particularly involving the Librarian who gets one of his biggest starring roles in the series. However, there are only a few new introductions to the Discworld mythos here, most notably Wuffles (an elderly dog). 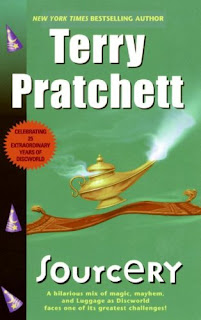 As entertaining as it is, Sourcery is also a little bit obvious as a story, and as with Equal Rites it does feel that this story should have had much more long-lasting ramifications for the history of the Disc, even moreso given the epic scale of the novel. These problems can be borne for the strong characters, entertaining humour and the unexpectedly sad ending (which remains effective even when you know what happens in later books, particularly Eric).

Sourcery (***½) is a strong comic novel which showcases Pratchett's growing confidence and ability. It is available in the UK and USA right now.
Posted by Adam Whitehead at 13:28

I gather that Sourcery is actually a book that Pratchett was pressured to write, since the publishers wanted another Rincewind novel. It is fun, but it does feel like a throwback to the first two, and I'm glad he moved away from the template again come Wyrd Sisters.