God of Clocks by Alan Campbell

Twelve powerful arconites walk the earth, preparing to bring about the destruction of humanity and bringing its souls under the command of Menoa, Lord of Hell. Ahead of their advance, assassin Rachel Hale, blood-witch Mina Greene, the angel Dill and the god Hasp retreat towards the castle of Sabor, god of clocks. Meanwhile, Cospinol, god of brine, decides that he must mount a direct assault on Menoa and orders his slave-champion, John Anchor, to pull him and his immense vessel into Hell, for a very strange voyage indeed... 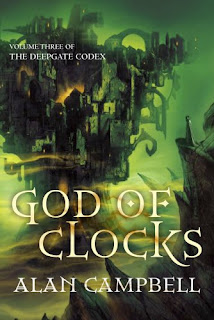 God of Clocks is the final volume of The Deepgate Codex (possibly the most misnamed trilogy ever: the titular codex is mentioned a couple of times and plays no substantive role in proceedings at all). It picks up after the cliffhanger ending to the second volume and expectations were for a big, epic climax. Instead, we get something different.

This is an odd book. Campbell's grasp of character and plot remains strong, and the revelations of backstory mysteries are mostly effective. But there are long diversions and side-plots that ultimately don't seem to go anywhere. The introduction of time travel is intriguing - fantasy typically doesn't touch it with a bargepole - and there's a lot of humour going on, but ultimately the narrative becomes confused and self-destructs towards the end. Time travel is often used as a get-out clause for lazy writers, something I'd never have pegged Campbell as (based on the strength of his first two novels), but here it fulfils its all-too tempting deus ex machina, narrative-crutch role. Simply put, the revelation that there are billions of alternate timelines in which every possibility is played out does make the reader wonder why he should be caring about this particular timeline and story. Even worse is the danger that time travel can be used to undo all the events of the story so far, meaning that the losses and prices that our heroes have paid are simply wished out of existence. Whilst the ending doesn't quite go that far (it's ambiguous what does get changed and what doesn't), it's still a bit of a cheat. 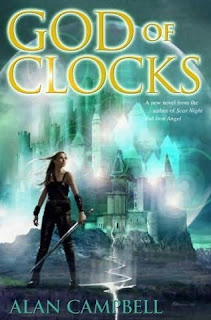 God of Clocks (**½) is a disappointing finale to the trilogy, which started out superbly but seemed to lose focus and cohesion as it went along, before ending on a decidedly anti-climatic note. There's enough interesting characters and ideas here for the book to be worth reading, but ultimately this is a trilogy that does not deliver on what it promised in the first book. It is available now in the UK and USA.
Posted by Adam Whitehead at 16:52

I have to agree with you here. I had been looking forward to the release of this book since I finished Iron Angel, but this was a very poor effort - it was all over the place! I really wouldn't recommend it.

Gutted. Campbell, what were you thinking???