The King of Lancre has died of natural causes. As everyone knows, it is very normal and even traditional for a king to die from a stab wound to the back followed by a swift plummet down a steep staircase. As is also traditional, the king's heir and his crown have mysteriously disappeared and it's no doubt only a matter of time before he grows up and returns to reclaim his birthright etc etc. Some things are Traditional. Unfortunately, the new king and his scheming wife aren't hot followers of Tradition and as a reign of terror falls on Lancre, it falls to three local witches (and a psychotic cat called Greebo) to take a hand in events... 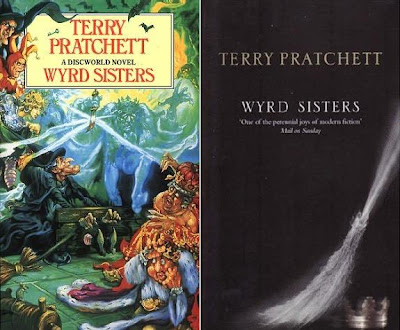 Wyrd Sisters sees Pratchett stepping up to the plate a bit more. Whilst the improvements in his writing skills have been clear and steady over the first five Discworld books, it was with this one that he really hit his stride, balancing moments of drama, comedy and even romance (of the awkward, stuttering kind) very nicely. The story is wholly unoriginal, being essentially a Discworld cover version of MacBeth (with a bit of Hamlet thrown in as well, not to mention too many clever references to performers from the Marx Brothers to Charlie Chaplin), but Pratchett doesn't worry about that and instead just revels in the sheer joy of writing here. 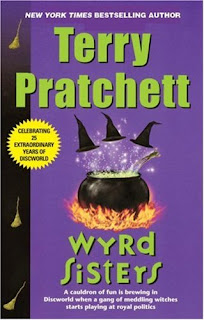 The town of Lancre and its somewhat crazy collection of inhabitants is vividly described, and the three witches (Granny Weatherwax, returning from Equal Rites, and newcomers Nanny Ogg and Magrat Garlick) are among Pratchett's better-written creations, but what makes Wyrd Sisters work is its thematic underpinning. Pratchett had previously toyed with using the Discworld setting to explore various real-life ideas and here addresses the idea of propaganda, the notion that the winners decide what history is and the general power of the written and spoken word, which can sometimes override reality and the truth. Pratchett doesn't harp on about it at tedious length (as he does in some of the weaker books in the series) but uses this theme and idea to inform the action and story, and pulls it off very well, if not quite as well as in the very best books in the series (some of which are coming up quite soon).

Wyrd Sisters (****) is a funny and smart book that sees Pratchett's writing skills stepping up a notch. It is available now in the UK and USA.

I'm taking a break from the Discworld reviews (only another thirty books to go!) to read and review Brandon Sanderson's Mistborn Trilogy.
Posted by Adam Whitehead at 17:12

Somehow, over the course of reading fantasy for the past 20 yrs, I have never read a Discworld book. I realize there are plenty, where can I jump in? Or should I attempt to locate the first book (difficulty factor 10 in my area).

Thanks for any advice

Mort or Wyrd Sisters are both good jumping-on points. The other four early ones are very much embryonic and less representative of the series that develops; some people love them, but others wonder what all the fuss is about.