Obviously I have my finger on the pulse of the moment or something (it wasn't a total coincidence, no sirree), as my recent reviews of the Amtrak Wars series have coincided with development of a series of movies based on the books. Renamed The Talisman Prophecy, the proposed film sequence has been in development for a couple of years and things had gone quiet. Surprisingly, it turns out there have been a fair few developments behind the scenes and the Australian production company working on the project have secured funding for the continued development of the films. In addition, some interesting concept art has surfaced. 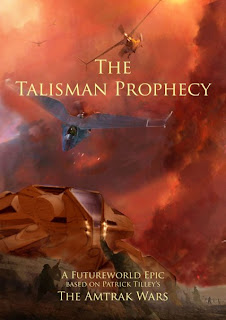 More info and artwork can be found here on the project's homepage and on the newly-established Facebook page dedicated to the project.

Whether this amounts to anything or not remains to be seen, but it's certainly interesting news.
Posted by Adam Whitehead at 15:38

Hmm, interesting. While I am very excited about the idea, I hesitate to get totally thrilled as it seems to take a lot to get a movie from concept to the screen. Alex Jaeger on the artwork front seems very positive, though. I love his stuff.

Who is the Aussie production company?

'ETA2010 PTY LTD', apparently. Sounds like one of those companies that comes together for one project.

So, 10 years later &, have you heard anything more about the project?
I picked up a copy of "Cloud Warrior" at a book sale in (about) 1988(?) & I've always thought it would make a good movie!
I've been (vaguely) planning a radio controlled model of a Wagon Train ever since too.

I think after 10 years of no news, we can assume this one is dead as a doornail.

It would be great if Amazon or Netflix bought out the rights to it and we got an adaptation. The books have so much going for them.

Would love to see the movie adaption of the series
Love the series
BUT
Would also like to see. A continuation of the series that was so ABRUPTLY STOPPED on an absolute CLIFF HANGER
Stopping a series because the author has died is one thing
There is a valid excuse BUT stopping a series just because Tilley is tired is ABSOLUTELY CRIMINAL
WE NEED TO KNOW WHAT HAPPENS NEXT
PLEASE PATRICK FINISH THE SERIES LIKE YOU SAID YOU WOULD

The dude is 95 years old, so I think we can safely say that the ship has sailed.
If you have the first edition of Earth-Thunder, it does basically have a plot outline of the sequel trilogy at the end. It's not too hard to see what would have happened in the sequels (it was removed in the second edition books from the late 1990s with the CGI covers though).

Luckily I have the first edition Earth Thunder and I have to disagree with many of the comments on this page...
The ending is perfect, By having this young child, s product of Roz and Cadillac, reaching for the ground ad the first GREEN leaf of grass appearing between her fingers, we have the perfect culmination of the story, the final completion of the Talisman prophesy and the ultimate good feel ending to a sextet of books that have had me enthralled for decades.
I bought the first book, Cloud Warrior. the same month it arrived in my local book store...
Had the following books on permanent order.
I do not believe it needs or needed, a follow up and.
should the readers here feel they need a follow up...write it!
Fan fiction is a noted genre.